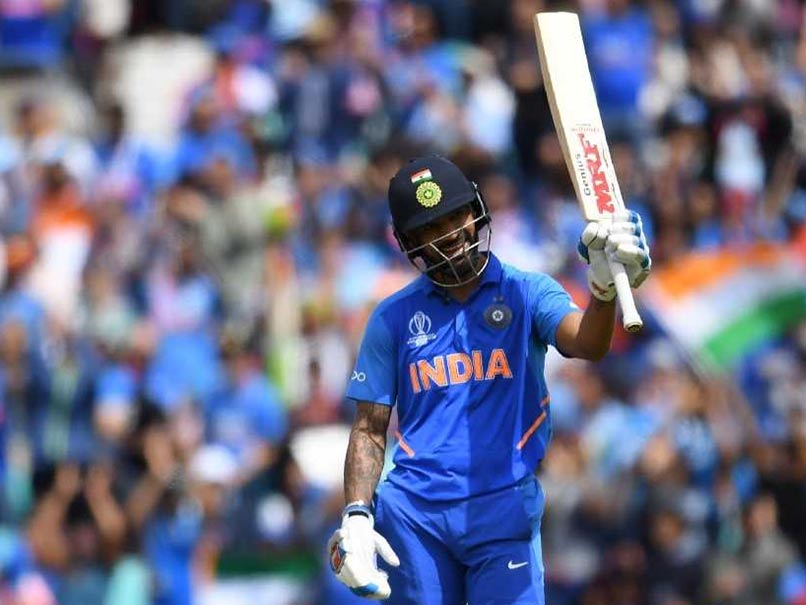 Shikhar Dhawan struck a sensational century to leave the Australians frustrated at The Oval.© AFP

Shikhar Dhawan slammed his 17th ODI century to lead India's charge against Australia in the World Cup 2019 league encounter between the two favourites at The Oval on Sunday. Shikhar Dhawan and Rohit Sharma had given India a solid start after skipper Virat Kohli won the toss and elected to bat against five-time and defending champions Australia. Both Rohit Sharma and Shikhar Dhawan started cautiously but as the innings wore on, the duo started to find the boundaries. Dhawan, in particular, upped the ante after negotiating the early spells of Mitchell Starc and Pat Cummins. Nathan Coulter-Nile came in for some stick with Dhawan taking a liking to his bowling.

India's first setback came in the third over with Nathan Coulter-Nile removing the dangerous Rohit Sharma for 57. But that seemed to have no effect on Dhawan who continued his attack on the Australian bowlers to devastating effect.

Skipper Virat Kohli came into bat at number 3 but was extremely cautious to begin with. Dhawan, though, relieved some of the pressure of Kohli by finding the boundaries at will.

Earlier, reigning champions Australia's new-ball duo of Pat Cummins and Starc both bowled a probing line to test the Indian openers with pace and swing on a sunny morning in south London.

Dhawan broke the shackles with three boundaries in Coulter-Nile's first over -- shots greeted with huge cheers from a largely India-supporting crowd.

Both teams are looking to stay unbeaten in the 50-over showpiece event with Australia winning their first two games and India defeating South Africa in their first match of the tournament.

The top four sides from the 10-team round-robin group stage will contest the semi-finals, with the final at Lord's, in northwest London, on July 14.

Virat Kohli World Cup 2019 India vs Australia, Match 14 Cricket
Get the latest updates on IPL Auction 2023 and check out  IPL 2023 and Live Cricket Score. Like us on Facebook or follow us on Twitter for more sports updates. You can also download the NDTV Cricket app for Android or iOS.