Yuzvendra Chahal and Kuldeep Yadav conceded 160 runs in their combined 20 overs, with Chahal finishing with the worst World Cup figures by an Indian bowler. 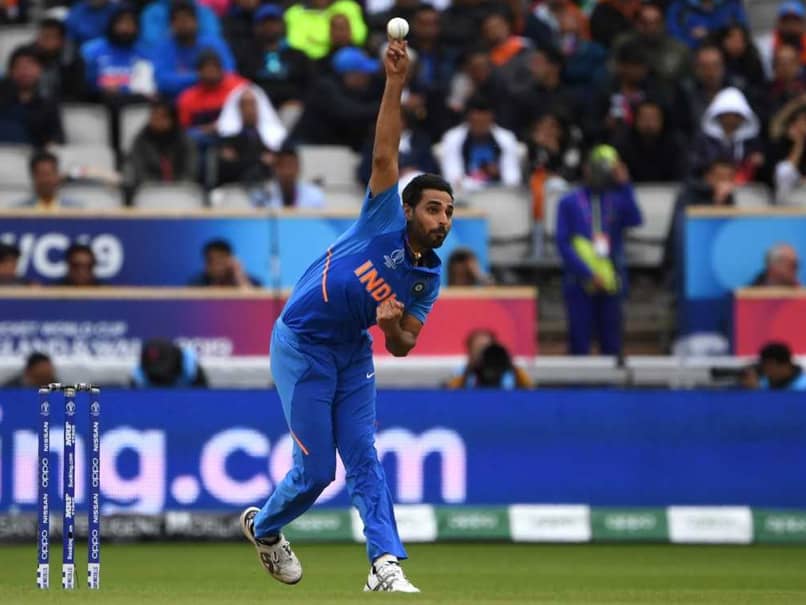 Bhuvneshwar Kumar, who suffered injury against Pakistan, might also make a comeback.© AFP

India have fielded two spinners and two frontline pacers in all their World Cup 2019 league matches so far but defeat at the hands of hosts England on Sunday due to lack of depth in batting order has forced the Indian team management to ponder upon the team combination. Ravindra Jadeja, who is yet to get a game in the ongoing World Cup, might be included in the playing XI against Bangladesh while Bhuvneshwar Kumar, who suffered injury against Pakistan, might also make a comeback.

"I think after the England game, the management team will be more open to various combinations," Sanjay Bangar was quoted as saying in an ICC media release.

Addressing reporters ahead of Bangladesh match, India's batting coach Bangar explained the importance of having a player who can also chip in with runs batting lower down the order.

"If you don't have major contributions from the middle order then someone like Bhuvneshwar Kumar lower down becomes really important," Bangar explained.

He hinted that Bhuvneshwar Kumar and Ravindra Jadeja anyone can play that role for the team.

"Anyone who is handy at number eight, and it could be Jadeja, gives you some freedom. It takes the pressure off those batting at six and seven so that they can start going at the bowling a little earlier.

"From that point of view, it is a tactic we are thinking about. There will be a point in the tournament where we have to assess every combination.

"We are open to all combinations. Three seamers can play, with Hardik (Pandya) as the fourth seamer, or we can look at Ravindra Jadeja coming in.

"We are thinking about all of these things," he added.

Yuzvendra Chahal and Kuldeep Yadav conceded 160 runs in their combined 20 overs, with Chahal finishing with the worst World Cup figures by an Indian bowler.

However, Bangar insists knowledge is power and has backed the two leg-spinners to learn from their mistakes and come back stronger.

Bangar accepted that conceding too many runs in the death overs is what cost India the game against England. He also insisted that playing at the same venue will help India as the players are more aware of wicket and dimensions than the Bangladesh players which will help them in preparing their tactics.

"Playing on the same track, we know the wicket and dimensions well. We will also learn from a bowling perspective, because in the last six or seven overs against England we gave away a lot of runs," he told reporters.

India will face Bangladesh on Tuesday and would like to secure a semi-final berth.

Edgbaston, Birmingham World Cup 2019 Cricket Bangladesh vs India, Match 40
Get the latest updates on IPL 2020, check out the IPL Schedule for 2020 and Indian Premier League (IPL) Cricket live score . Like us on Facebook or follow us on Twitter for more sports updates. You can also download the NDTV Cricket app for Android or iOS.