For Pakistan to qualify for the World Cup semi-finals, their fans will hope for England's defeat in at least one of their remaining two matches. 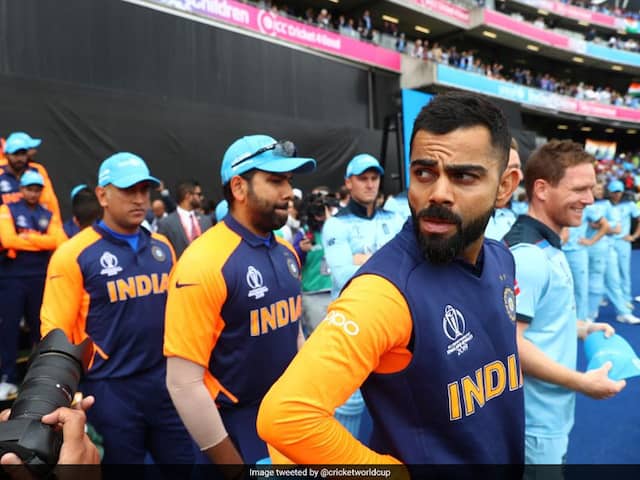 Virat Kohli has led India to an unbeaten streak in the World Cup so far.© Twitter

Virat Kohli was amused by the fact that Pakistan cricket team and its fans will pray for India's victory, which he called a "rare thing", in a World Cup 2019 league stage encounter against England at Edgbaston on Sunday. For Pakistan to qualify for the World Cup semi-finals, their fans will hope for England's defeat in at least one of their remaining two matches. India, on the other hand, will be through to the semis with just one win in their remaining three matches. Joking about the crunch situation for Pakistan, a giggling Virat Kohli said at the toss, "To be honest I haven't seen what's been happening outside. But I do believe the Pakistani fans will be supporting us, which is a rare thing."

England, who were displaced by Pakistan from the fourth position in the points table with their win over Afghanistan on Saturday, opted for two changes in the playing XI. All-rounder Liam Plunkett and opener Jason Roy came in the side, replacing Moeen Ali and James Vince respectively.

"So I want the whole of Pakistan to back India, on social media and when it comes to public news. Because we need England to be out of this tournament," Akhtar said in a video on his YouTube channel said.

"Very odd, that as a Pakistani I'm saying this and requesting all Pakistanis living in the country and abroad - please support whoever you think is right. But another option - you drink their waters, so you better support them. You live in England, so support England. You eat in England, so support England. However, as Pakistanis in Pakistan, we want Pakistan to qualify. If England get knocked out and Pakistan win against Bangladesh, the way will open up for us," he added.

After their three-wicket win over Afghanistan, Pakistan have moved to fourth place in the points-table, pushing hosts England to the fifth spot in the World Cup.

Pakistan will now face Bangladesh in their final league stage match in a bid to qualify for the semis.

Edgbaston, Birmingham World Cup 2019 Cricket England vs India, Match 38
Get the latest Cricket news, check out the India cricket schedule, Cricket live score . Like us on Facebook or follow us on Twitter for more sports updates. You can also download the NDTV Cricket app for Android or iOS.