Pop idol Rihanna lent glitz and glamour to World Cup 2019 as she turned up in Chester-le-Street to watch the West Indies take on Sri Lanka. 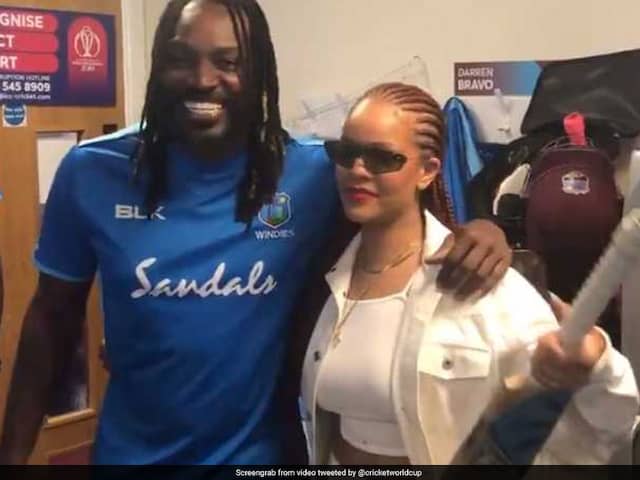 Rihanna and Chris Gayle posed for pictures in the dressing room post the West Indies vs Sri Lanka match.© Twitter

World Cup 2019 has witnessed quite a few star personalities gracing the stadium. The likes of England football coach Gareth Southgate, Bollywood star Ranveer Singh, South superstar Mahesh Babu among others have been seen sighted during matches but none have managed to create the buzz that pop queen Rihanna generated on Monday when she was spotted cheering on the West Indies during the World Cup 2019 clash against Sri Lanka at the Riverside Ground in Chester-le-Street. Despite West Indies' narrow loss, Rihanna seemed in high spirits and was even seen in the Windies dressing room after the game.

Cricket World Cup's twitter handle posted a video of the pop queen meeting the Universe Boss in the West Indies dressing room. Chris Gayle posed for pictures with Rihanna and was also seen giving a signed bat to the pop star.

Dressed in white and wearing sunglasses, the Barbados-born singer gave vocal support to the two-time champions, who have flopped badly at the World Cup, winning just one match so far.

But she failed to lift the side, who will be heading home after the league stage in England and Wales, as they slipped to a sixth defeat in eight matches.

Sri Lanka held off a West Indies charge to win an exciting battle by 23 runs in World Cup 2019. Both teams came into the match aware they could not reach the semi-finals but the West Indies came close to pulling off the highest successful chase in World Cup history.

Sri Lanka batted brightly to post an imposing total of 338 for six in their 50 overs, thanks largely to Avishka Fernando's first One Day International (ODI) century. That total looked beyond the West Indies in the early part of their innings but Nicholas Pooran dug deep, also scoring his maiden ODI ton.

However, it wasn't enough as Sri Lanka held on to register their third win in the tournament.

In May, she launched a groundbreaking partnership with LVMH to launch a luxury fashion brand based in Paris that will make ready-to-wear clothes, shoes and accessories.

Avishka Fernando World Cup 2019 Sri Lanka vs West Indies, Match 39 Cricket
Get the latest Cricket news, check out the India cricket schedule, Cricket live score . Like us on Facebook or follow us on Twitter for more sports updates. You can also download the NDTV Cricket app for Android or iOS.