Paul Heyman also said that "cricket is a very popular sport but it's barely a man's sport, it is an activity." 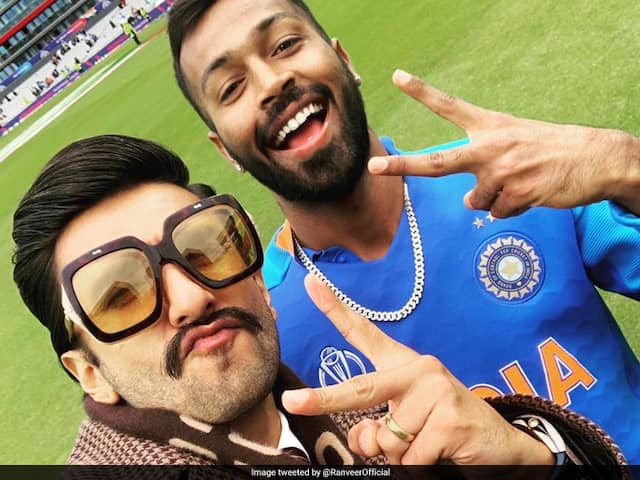 Hardik Pandya posed for a photograph with Ranveer Singh after India's win against Pakistan.© Twitter

Paul Heyman has become one of the biggest names in the world of World Wrestling Entertainment (WWE) thanks primarily to a weapon that he is a master of -- words. Being the advocate of Brock Lesnar, a hugely popular name in India from the WWE stable, Heyman is well known in the country but his recent social media attack on Bollywood actor Ranveer Singh helped him and the WWE to cash in on the buzz around the 2019 ICC World Cup.

Heyman's anger is reserved not just for Ranveer but also for the person that the latter took a picture with which irked Heyman -- Hardik Pandya. The Indian all-rounder, according to Heyman, is "not man enough to step into the ring with Brock Lesnar."

"Let's be real about this. Cricket is a very popular sport but it's barely a man's sport, it is an activity," Heyman told IANS. "Brock Lesnar is the former National Collegiate Athletic Association (NCAA) champion and the baddest dude on the planet. So I don't see Hardik Pandya being man enough to step into the ring with him."

As far as the "legal notice" that he served Ranveer Singh goes, Heyman said that he would rather keep the strategy private. "Singh is obviously someone who walks around dreaming of being Paul Heyman while Hardik Pandya wants to be Brock Lesnar. Otherwise why would he authorise that tweet to be released. It's not like he didn't pose for the picture," he said.

"So, it's clear that Hardik Pandya wants to be Brock Lesnar because Brock Lesnar is far more famous and successful on a global basis and Singh exposed himself as a Paul Heyman wannabe in one tweet (sic.)"

Hardik Pandya World Cup 2019
Get the latest Cricket news, check out the India cricket schedule, Cricket live score . Like us on Facebook or follow us on Twitter for more sports updates. You can also download the NDTV Cricket app for Android or iOS.