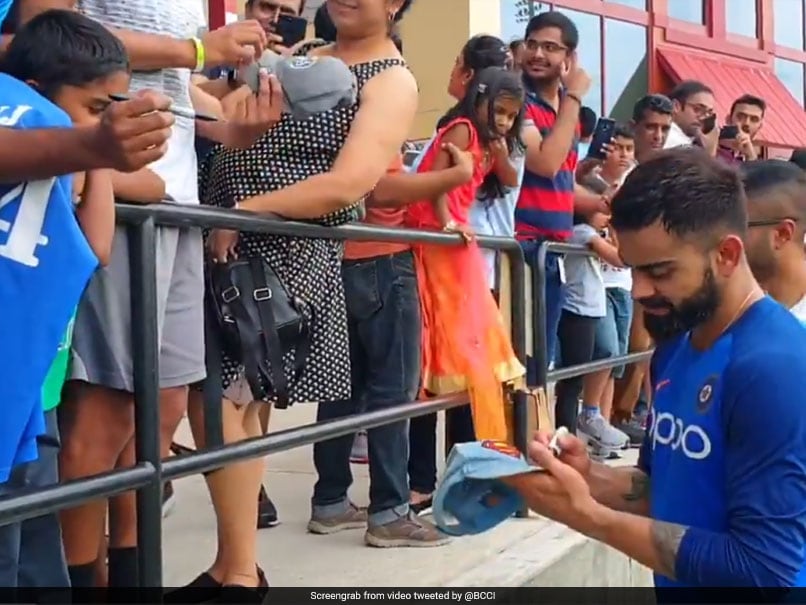 India skipper Virat Kohli never misses an opportunity to acknowledge the support he receives from his fans. He has often been seen interacting with his fans. During India's practice session at Central Broward Regional Park Stadium Turf Ground in Florida on Friday, fans were waiting patiently for the India captain. Virat Kohli charmed a section of them by signing autographs. India will take on the West Indies in the first T20I of the three-match series on Saturday.

The official Twitter handle of the Board of Control for Cricket in India (BCCI) shared a video showing Virat Kohli interacting with fans. The post was captioned, "Skipper Virat Kohli does know how to bring smiles and joy to the fans #TeamIndia." Indian fans, especially kids, also clicked selfies with Virat Kohli.

Skipper @imVkohli does know how to bring smiles and joy to the fans #TeamIndia pic.twitter.com/lqrAUaCODY

The three match T20 series against the West Indies will be followed by three ODIs and two Tests.

Team India sweated it out in the nets ahead of the first T20I. The cricketers were also seen playing football during the practice session.

Earlier, Virat Kohli shared a picture on Twitter in which he could be seen with some of the teammates. The post's caption read, "SQUAD". In the picture, Ravindra Jadeja, Navdeep Saini, Khaleel Ahmed, Shreyas Iyer, Krunal Pandya, Bhuvneshwar Kumar and KL Rahul could be seen posing alongside Kohli.