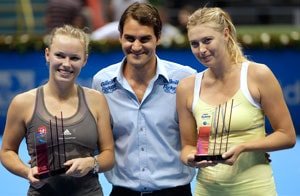 Does a long match always equal to a great match? Not always. While many choose to not read a particular book because it's too thick, or not watch a particular film because it's too long, that's not how it works in sports. Can you decide before a match, in any sport, whether you're going to watch it or not, depending on its duration? No, right?

Earlier this week, Stacy Allaster, CEO of the Women's Tennis Association (WTA), said that female players are ready and willing to play 5 set matches in Grand Slams. The comment comes after Andy Murray became the latest player to talk about equal match lengths for men and women. So will they? More importantly, should they?

Let's make it clear that it's definitely not a 'oh, but they are the weaker sex' debate. Something like this has to be looked at from a bit of a social perspective. Equal pay, which is a relatively new thing in tennis, should ideally mean equal play. And that's exactly what the male players are asking, why do we have to play longer matches if the money we're getting paid is that same? Let's be honest. That apart, there isn't exactly a clamour to get women to play longer tennis matches. It would be safe to say, that compared to the insanely high levels of men's tennis, women's tennis today is a bit of an inferior product.

Those that are big fans of modern day women's tennis (and I don't know many of those), would say, of course, there must be 5-setters for women too. It's not the question of fitness, as I've mentioned before. If women can run marathons and triathlons, if they can participate in football and cricket matches as long as the ones men play, then why not in tennis too? I'm trying to remember really hard of a women's singles Grand Slam final that I watched in recent years and said, "Wow, what an epic match!". I can't remember any. Will the women produce better tennis if they have to play an extra set or two? Will it change the fact that many of them play boring baseline tennis, and they may just be more aggressive because they have to play for longer? It could make the women's game a little more entertaining, you never know.

But does a long match always equal to a great match? Not always. While many choose to not read a particular book because it's too thick, or not watch a particular film because it's too long, that's not how it works in sports. Can you decide before a match, in any sport, whether you're going to watch it or not, depending on its duration? No, right? (Though I do it regularly with T20 cricket, but in quite the opposite way. It's supposed to be shorter and hence more entertaining, but it's not my preferred format to watch)

Women have played 5-setters, by the way. Between 1984-1998, the year ending competition for women was played in a best-of-five format. Apparently the reason for it was to let fans watch Martina Navratilova play for longer! In a regular match, she usually wouldn't take more than 45 minutes to get the better of her opponent. But here's what. Chances are it's going to feel like a good movie gone bad because of those last 30 minutes that did nothing apart from making it drag.

There really is no end to this debate. Because the equal pay rule won't change, and neither will men play best-of-three sets, just to make things equal. But then a Grand Slam is supposed to be grand, and yes, women deserve to play epic matches too. It would then not be such a bad idea to get women to play 5-setters just in the semis and final of a Grand Slam, instead of the full two weeks. Athletes train all their lives. So endurance and stamina isn't a problem at all.

Just remember that longer matches for women also means having to bear with the grunting for longer!

Comments
Topics mentioned in this article
Jelena Dokic Marion Bartoli Mathilde Johansson Lucie Safarova Petra Martic Tennis
Get the latest Cricket news, check out the India cricket schedule, Cricket live score . Like us on Facebook or follow us on Twitter for more sports updates. You can also download the NDTV Cricket app for Android or iOS.