Opinion: Serena Williams Was Blamed For Defending Herself; That's Nothing New For Black Women The 23-time Grand Slam champion Serena Williams was stunned by Japan's Naomi Osaka in straight sets in the US Open 2018 final on Saturday. 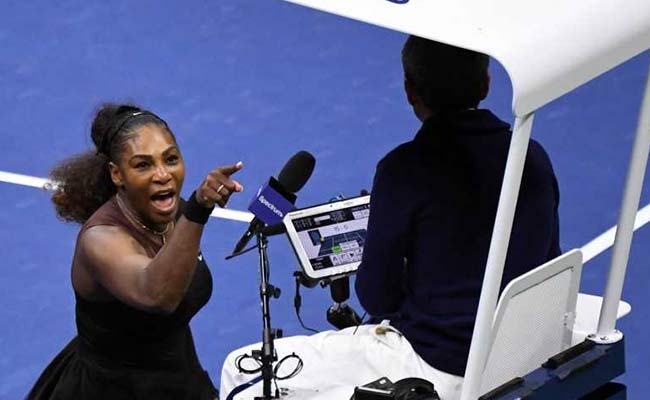 Imagine being blamed for defending your integrity. Then understand that being attacked for speaking up is part of daily life for black women. See April Ryan, Maxine Waters, Kamala Harris, Susan Rice and Michelle Obama for a few examples of how black women have been admonished for their public statements. Somehow it seems to happen when we challenge male authority.

It has happened before to Serena Williams, in collisions with tennis' ruling organizations, but never as dramatically as in the women's final of the U.S. Open on Saturday.

I had a bad feeling from the moment that Williams walked over to chair umpire Carlos Ramos during the second set of her match against Naomi Osaka, defending herself against his accusation that she was being guided by coach Patrick Mouratoglou from a courtside box. This would be a turning point in the match, I sensed, and not a good one for Williams.

Ramos did not openly state that Williams was cheating, but the implication of the umpire's decision left little room for doubt that he believed she was trying to gain an unfair advantage. Williams insisted, "I'm telling you I don't cheat to win, I'd rather lose, and I'm just letting you know." The crowd's effusive applause after the exchange made clear that the spectators thought she was in the right.

Yet, instead of warning Mouratoglou, Ramos had penalized Williams - a professional athlete with 23 Grand Slam singles titles, and therefore well versed in tennis rules and regulations - for her male coach's faux pas. Mouratoglou later admitted that he had been gesturing to Williams and was mystified that a common practice among coaches at tennis tournaments was suddenly being punished. Not only did Williams have to bear the brunt of the umpire's decision, but she also had to accept that it was a violation not of her doing.

And it was a turning point. Distressed and frustrated, Williams clearly lost her concentration. She broke her racket after badly misplaying a shot - and was penalized for it, the only justified ruling against her in what turned out to be a fateful trio. With two violations, she was assessed a one-point penalty, in a match where every point was vital.

During a break, Williams was still waiting for Ramos to acknowledge that she had not cheated: "You're attacking my character. Yes you are. You owe me an apology." She did not want her integrity to be tainted by a man's false characterization. Ramos could have defused the situation simply by saying that he understood her point - and then warning her that if she continued to speak, he would penalize her for a third time.

Instead, he let Williams go on, until she made the apparently unforgivable point that Ramos was a "thief" for stealing a point from her. No one listening would seriously believe that Williams was literally accusing him of theft, yet at that instant Ramos - defending his integrity - assessed a third violation. That automatically meant a one-game penalty against Williams, a disaster in a match where she was trying to come back from dropping the first set. Losing the second set meant losing the match, and she did.

Some of the media descriptions of Williams' actions on the court as a "furious rant," "an outburst," a "shocking tirade" and a "meltdown" only support the stereotyping and unconscious bias that permeate our culture, eager to characterize black women as angry and women in general as incapable of controlling our emotions.

"I'm here fighting for women's rights and for women's equality and for all kinds of stuff," Williams told reporters after the match, noting of Ramos that "he's never taken a game from a man because they said 'thief.' For me, it blows my mind. But I'm going to continue to fight for women."

She showed this with her warm embrace of winner Osaka during the awards ceremony. Osaka, the 20-year-old daughter of a Haitian father and Japanese mother, was in tears after what must have been an overwhelming experience in winning her first Grand Slam title.

The victory was a hollow one, alas, forever tainted by the same old sexist, misogynistic tropes that women, and black women in particular, have been dealing with for centuries. Osaka says she grew up idolizing Williams. And well she should have, not just for the way Williams has played the game but also for what she has represented throughout her career. Thanks to Williams, the path that Osaka follows in tennis and in life may be a little less difficult, but there is plenty of work left to be done.

De Luca is a media consultant and the former editor in chief of Essence magazine.

(Disclaimer: The opinions expressed within this article are the personal opinions of the author. The facts and opinions appearing in the article do not reflect the views of NDTV and NDTV does not assume any responsibility or liability for the same.)

(This story has not been edited by NDTV staff and is auto-generated from a syndicated feed.)
Comments
Topics mentioned in this article
Serena Williams Tennis
Get the latest updates on ICC Women's Cricket World Cup 2022 and IPL 2022, check out the Schedule , Live Score and IPL Points Table. Like us on Facebook or follow us on Twitter for more sports updates. You can also download the NDTV Cricket app for Android or iOS.