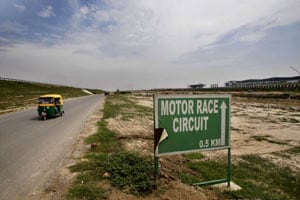 Get the Commonwealth Games and you have security scare. Get the Formula One and the world chooses to talk of social imbalance in India threatening the image of the sport. When will the whining stop?

Get the Commonwealth Games and you have security scare. Get the Formula One and the world chooses to talk of social imbalance in India threatening the image of the sport. When will the whining stop?

Browsing through what foreign press has to say on India's upcoming date with raw speed come October, elaborate write-ups on alcoholism, women oppression and economic mismatch are the first to emerge. This is not individual finger-pointing but British press leads the 'eye-opening' charge on India's apparent backwardness while reporting on the F1 event. Type Guardian Indian F1 or BBC India F1 on Google and enlighten yourself with revelations from foreign correspondents going full-out making Greater Noida villagers pose for their camera-crew.

For not one instant are the facts wrong. Neither are the images flashed all across entirely faked, perhaps. The question is not on the integrity of stories and features which surely make for an interesting read with a cup of English tea or lager beer depending on in which part of the developed world, the story is being read or seen. The question is on repeated and merciless assault on India's weakness whether in terms of corruption during CWG, terrorism in general or now, brand Indian F1 and the villages around it.

So this one article explains: The roads in Narangpura remain in an abysmal state, electricity is a rare occurrence and the school is as decrepit as ever. Some talk of fresh money as compensation for loss of land as rotting minds while others point at drunken teenagers brawling in the streets.....

I have never been to this area around the state-of-the-art track at Greater Noida and credit to the British writer above for venturing out. What he writes may well be true but can he please tell me about the actual track too. And not copied from the official press-release. Not once could I find his news agency giving me any fact on the track, except how many manual labourers are involved and how they are toiling under the sun to finish the work on time, all, of course, in violation of human rights.

India may be seen as a developing power but most foreign agencies, I feel, are not ready to give minor credit where it's rarely due. So British Olympic Association may say recent riots were not trademark of English society but what the world has come to in general, let's not go overboard with partisan reports when in this unfortunate part of the world. The truth is, the F1 is coming home to India, let's welcome it as much as we doubt it.

Comments
Topics mentioned in this article
Formula 1 Tennis Buddh Circuit
Get the latest updates on IPL 2021, IPL Points Table , IPL Schedule 2021 , live score . Like us on Facebook or follow us on Twitter for more sports updates. You can also download the NDTV Cricket app for Android or iOS.