A date to remember with Maria Sharapova 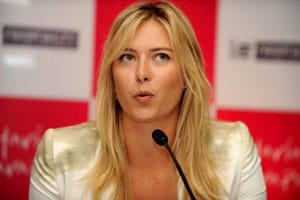 What happens when woman of your dreams is sitting right in front of you and you are caught between your profession and fascination.

I clearly remember the evening when I had just finished work and was ready to pack in for the day, when a good friend came and said 'thank me later'. Confused at that remark, my obvious follow up question was 'what for'? My friend for some reason chose to ignore me but my editor later called me to her cabin and said 'Pandit get ready, you might get to interview Maria Sharapova'. Needless to say my heart skipped a beat but being a true professional (that I try to be), I responded with a simple 'cool'. Obviously I wouldn't tell my boss that I've been a big fan of the Siberian Bombshell and tennis had nothing to do with my fascination for her.

The next 2 days were spent dreaming about the perfect interview. And of course I had to resemble prince charming though Maria didn't need a makeover as she's perfect the way she is! Needless to say I had to tell my friends, whose first reaction was 'Pandit yaar, we need to drink to that', followed by suggestions ranging from wearing shoes which would enhance my 5 feet 9 frame to a more respectable height, as Maria's 6 feet 2, added to her insistence for heels, she becomes all of 6 feet 4 inches!

I for one had given serious thought of asking out the 10th woman to win a career slam. After all, I didn't have much to lose? Rejection (99.9999% certain), slap in the face (in true Sharapova forehand style) or just being called a perv (let's face it, that's normal). All the above scenarios went right out of the window on the day of the interview as I was told Maria wasn't doing one on ones!

Disappointed but not deterred from the cause, I set out for the South Delhi Hotel, eagerly waiting to set eyes on the woman of my dreams. As usual I was late, as usual there were several other print and T.V. channels trying to sugarcoat the organisers in hope of getting that one big exclusive that would run on their channel the entire day. None of their efforts paid off and we were all asked to take our seats before the guest of honor came into the room. The flash lights started clicking, cameras started rolling as soon as ethereal Ms Sharapova was in the house! Tall, well turned out but far more beautiful than I had ever expected.

Soon the questions began, 'What's your favourite title win', 'What do you make of Serena Williams', 'How do you view Women's tennis'? That's when I decided to raise my hand, microphone ready and my first words to the highest earning woman athlete in the world were 'Maria...I think your very pretty', that's it! Silence engulfed the small room that was holding the press conference, when Sharapova said 'Thanks but it's only my make-up and hair, I don't wake up looking like this in the morning'. The entire room was laughing and I for one realized that not only is she very beautiful but also extremely charming with her words.

The rest of the press conference was a breeze, after all I can one day tell people that I told the one only Maria Sharapova she was very pretty and to top it all, she responded to it! I guess that's what you say are the perks of being a sports reporter.

Comments
Topics mentioned in this article
Tennis Maria Sharapova
Get the latest updates on IPL 2021, IPL Points Table , IPL Schedule 2021 , live score . Like us on Facebook or follow us on Twitter for more sports updates. You can also download the NDTV Cricket app for Android or iOS.