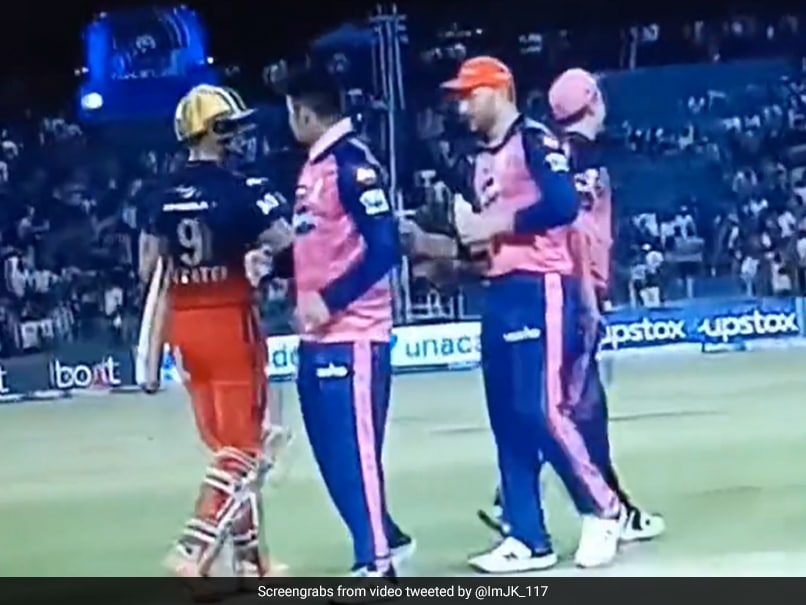 IPL 2022: Harshal Patel did not shake Riyan Parag's hand after the match against Rajasthan Royals.© Twitter

Royal Challengers Bangalore star Harshal Patel was involved in a heated altercation with Rajasthan Royals' Riyan Parag after the final over of the Royals' innings in their Indian Premier League (IPL) 2022 match on Tuesday, when the youngster hit the pacer for a boundary and two sixes. Harshal was also the last wicket to fall for RCB as they were bowled out for 115 in their chase of 145. As he was walking back to the dugout, he snubbed a handshake from Riyan Parag, but went on to shake hands with other Rajasthan players.

Parag looked back as Harshal walked past his extended hand, before turning back to his teammates and celebrating their 29-run victory that saw them move up to the top of the IPL 2022 points table.

Here is the video of the heated exchange between the two earlier in the match.

This was after 2 sixes were hit off the last over pic.twitter.com/qw3nBOv86A

Riyan Parag was the star of the show for the Royals, rescuing them with the bat after a top order collapse.

He walked in with the scoreboard reading 68/4 after 9.3 overs and hit his first half-century of the season to take the team to a total of 144/8.

Parag has not quite fired with the bat yet this season, but on Tuesday, he was at his best, smashing 56 off 31 deliveries to ensure his team reached a respectable total. He hit three boundaries and four sixes.

He also took four catches as RCB were bowled out for 115, including that of Harshal Patel.

Harshal Patel Riyan Parag Cricket
Get the latest updates on ICC Women's Cricket World Cup 2022 and IPL 2022, check out the Schedule , Live Score and IPL Points Table. Like us on Facebook or follow us on Twitter for more sports updates. You can also download the NDTV Cricket app for Android or iOS.