IPL 2021: The SunRisers Hyderabad vs Royal Challengers Bangalore left many RCB fans, including Dhanashree Verma, hoarse as they screamed their team to a sensational win. 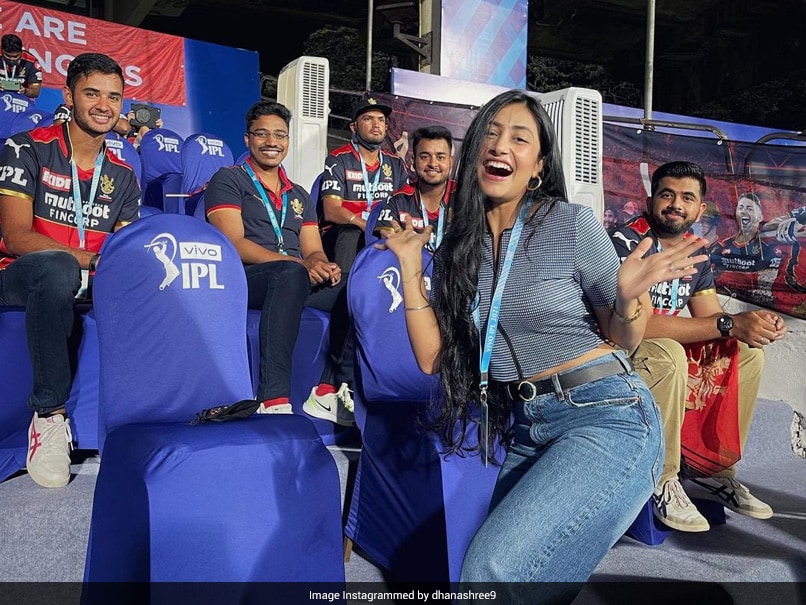 IPL 2021: Dhanashree Verma was in the stands cheering for RCB during their match against SRH.© Instagram

Royal Challengers Bangalore's six-run win against SunRisers Hyderabad on Wednesday was a thrilling encounter for fans of the Virat Kohli-led team as they grabbed victory from the jaws of defeat. After posting just 149/8, things got gloomier for RCB as David Warner looked set to take the game away from them. But RCB somehow managed to pull the game back, with Shahbaz Ahmed taking three wickets in the 17th over and Harshal Patel shining at the death again, to snatch victory and go top of the table.

RCB star Yuzvendra Chahal's wife Dhanashree Verma, who was in the stands along with the rest of the team's entourage, took to Instagram on Thursday to share some moments from the match.

"That moment when we all lost our voices cheering for the team last night. Epic match," she wrote.

"From squeezing and restricting runs in the middle overs to taking wickets in the death overs... we bagged our victory so.... It's all about team work," she added.

The match was Chahal's 100th in the Indian Premier League (IPL) for RCB. The leg-spinner failed to take a wicket in the milestone game, but gave away just 29 runs in his four overs, and will be happy with the team's win.

RCB have gotten off to a good start to the season, winning two close encounters.

In the season-opener, RCB beat defending champions Mumbai Indians by two wickets, hitting the winning run off the last delivery of the match.

RCB now lead the table, and will next take on Kolkata Knight Riders in Chennai on Sunday.

Harshal Patel Shahbaz Ahmed Cricket
Get the latest updates on ICC T20 Worldcup 2022 and CWG 2022 check out the Schedule, Live Score and Medals Tally. Like us on Facebook or follow us on Twitter for more sports updates. You can also download the NDTV Cricket app for Android or iOS.