Krunal Pandya is currently in quarantine in the United Arab Emirates, ahead of the 13th edition of the Indian Premier League (IPL). 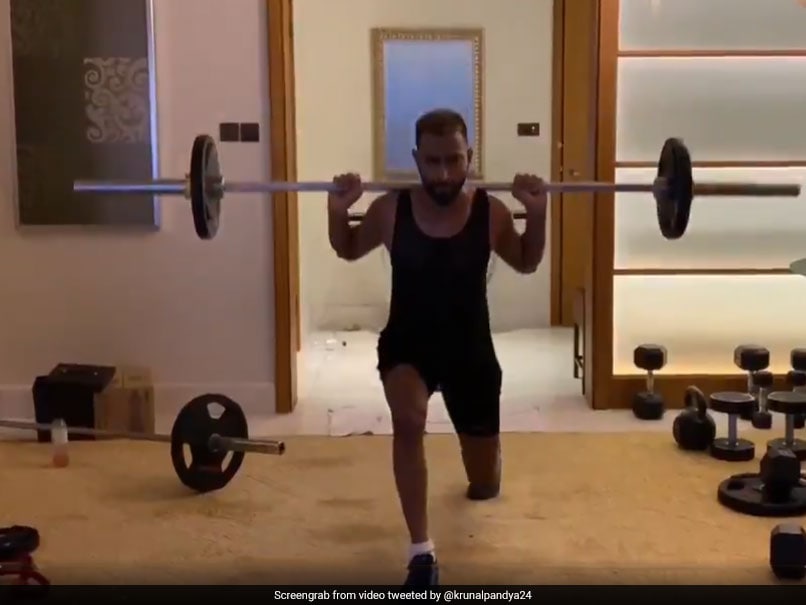 Krunal Pandya has already started preparing for the IPL 2020 in his hotel room.© Twitter

Mumbai Indians (MI) all-rounder Krunal Pandya is undergoing a mandatory quarantine in the United Arab Emirates (UAE) along with the rest of the squad, ahead of the 13th edition of the Indian Premier League (IPL). The other IPL sides are similarly under quarantine, with medical tests scheduled on the first, third and sixth day of the phase. Players testing negative on all three occasions will be entering the bio-bubble provided, with an option to start training. However, Pandya has already started preparing for the IPL 2020 in his hotel room, as was evident from the video posted by the player on his official Twitter handle. The 29-year-old can be seen lifting weights and practising freestyle exercises.

"Quarantine won't stop the work out," wrote the player.

The all-rounder had recently shared a picture with brother Hardik on social media, where the two can be seen wearing PPE kits, ahead of their UAE flight.

"We're getting used to our new travel kit. UAE, here we come," read the caption.

MI are the defending champions, having defeated Chennai Super Kings in the final of the previous edition of the tournament by 1 run. They are led by Team India batsman Rohit Sharma, who will be conferred with the Rajiv Gandhi Khel Ratna Award on August 29.

The 2020 edition will begin on September 19 with the final set to be played on November 10.

Rohit Sharma Cricket
Get the latest updates on India vs Australia and check out  Schedule, Results and Live Score. Like us on Facebook or follow us on Twitter for more sports updates. You can also download the NDTV Cricket app for Android or iOS.