Kolkata Knight Riders gave their fans a sneak peek into their team room in Abu Dhabi ahead of IPL 2020. 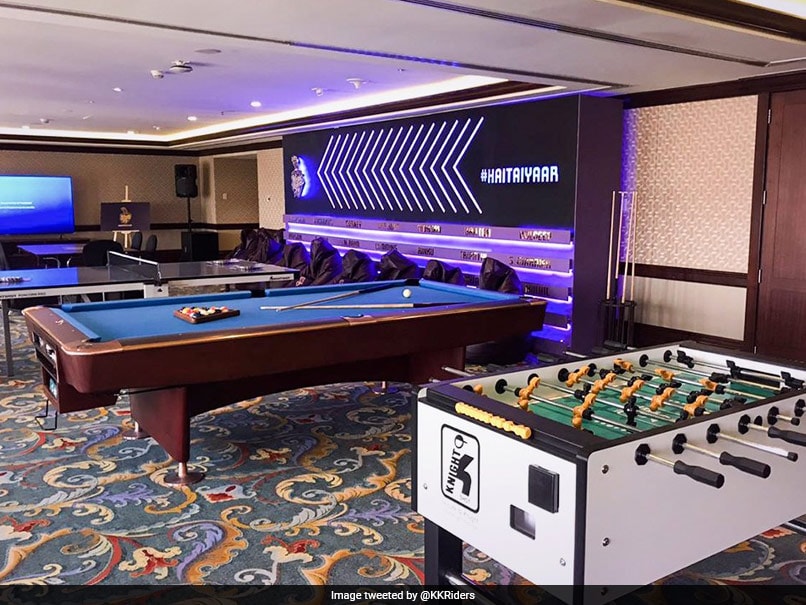 Kolkata Knight Riders took to Twitter on Sunday to give their fans a sneak peek into their team room in Abu Dhabi. The two-time Indian Premier League (IPL) champions landed in the United Arab Emirates on Thursday to participate in the 13th edition of the cash-rich league. The IPL 2020was moved out of India due to the rising coronavirus cases in the country. All the eight franchises have arrived in the UAEfor the upcoming IPL. "New city, New #HomeOfTheKnights Sneak-peek into the #KKR Team Room in Abu Dhabi," KKR's official handle captioned the pictures.

This year's IPL will begin on September 19 and the final of the tournament will be played on November 10.

KKR finished on the fifth spot last year, failing to qualify for the play-offs.

Despite having Andre Russell, the purple cap winner, in their team, the Kolkata-based franchise lost too many close games last season.

As the IPL 2020 is nearing, Russell is gearing up well for the tournament as he smashed a quick-fire half-century off just 38 deliveries in a knock that included five maximums in a Caribbean Premier League game on Saturday.

KKR have roped in Brendon McCullum as their head coach for this season as they look to turn things around in the UAE.

This is not the first time that the IPL will be played in the UAE. In 2014, UAE had hosted the T20 league partially due to the general elections in India.

Brendon McCullum IPL 2020 Cricket
Get the latest updates on ICC Women's Cricket World Cup 2022 and IPL 2022, check out the Schedule , Live Score and IPL Points Table. Like us on Facebook or follow us on Twitter for more sports updates. You can also download the NDTV Cricket app for Android or iOS.