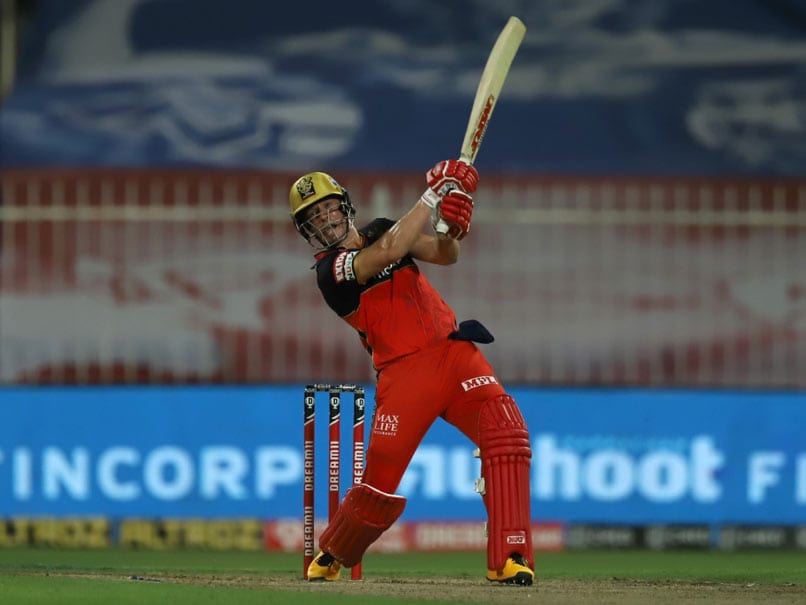 Royal Challengers Bangalore (RCB) romped to amassive 82-run victory over Kolkata Knight Riders (KKR) on Monday in Sharjah on the back of an AB de Villiers masterclass of 73 not out from just 33 balls. His partnership with RCB skipper Virat Kohli, who remained unbeaten on 33 off 28, for the third wicket that was worth 100 runs in just 7.4 overs took RCB from a steady start to an imposing total of 194/2. KKR, in reply, capitulated quite early in their chase, losing key wickets of Shubman Gill, Eoin Morgan and Andre Russell in the space of two overs, and were restricted to 112/9.

De Villiers came in with RCB 94/2 in 12.2 overs and a platform set for the final-overs assault. The South African took special liking to the KKR pacers, hitting Kamlesh Nagarkoti for two sixes and a four in the 16th over followed by two more sixes and a boundary off Pat Cummins in the next.

Russell, the designated death bowler for KKR this season, also went the distance as the 18th over began with de Villiers hammering the big West Indian for a six and a four. The final over, also bowled by Russell, fetched 17 runs for RCB with de Villiers scoring 15 of those.

Such was the batsman's dominance that Kohli was reduced to a mere spectator at the other end as de Villiers farmed most of the strike.

The KKR reply was tepid right from the word go. Debutant Tom Banton, playing in the place of Sunil Narine who got reported for a suspect action, could manage only 8 off 12 before Navdeep Saini bowled him with a 148 kmph ripper.

Nitish Rana (9), Morgan (8) and captain Dinesh Karthik (1) all failed on the day and while Russell impressed for a bit, hitting Isuru Udana for 6, 4, 6 in the latter's first over of the match, he holed out in the same over to long-off thereby ending KKR's hopes of a win.

Chris Morris and Washington Sundar got two wickets each for RCB while Udana, Saini, Mohammed Siraj and Yuzvendra Chahal returned with a wicket each.

With this victory, RCB moved to the third position on the points table with 10 points from seven matches while KKR dropped down to fourth with eight points.

Pat Cummins IPL 2020 Royal Challengers Bangalore vs Kolkata Knight Riders, Match 28 Cricket
Get the latest updates on Fifa Worldcup 2022 and check out  Fifa World Cup Schedule, Stats and Live Cricket Score. Like us on Facebook or follow us on Twitter for more sports updates. You can also download the NDTV Cricket app for Android or iOS.