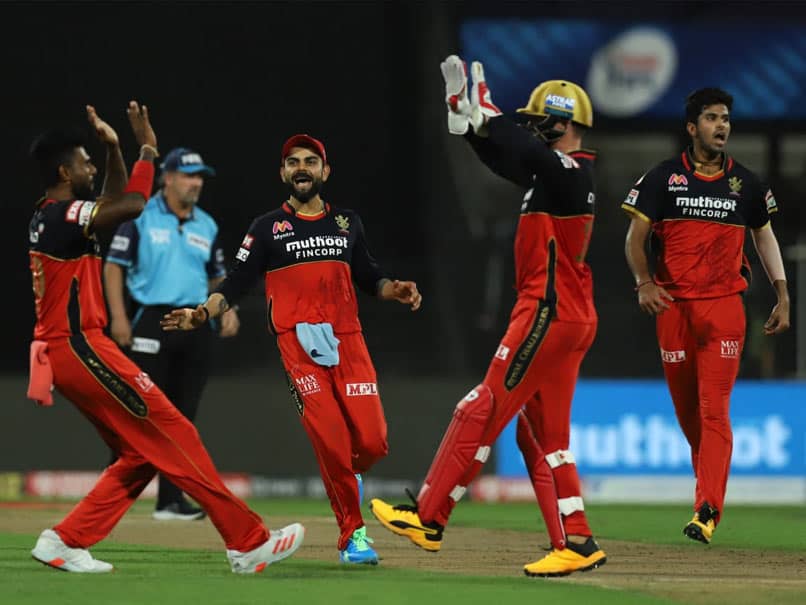 Riding on AB de Villiers' (73 not out off 33 balls) explosive half-century, Royal Challengers Bangalore thrashed Kolkata Knight Riders by 82 runs at the Sharjah Cricket Stadium on Monday climb to third spot on the points table. After posting a huge total on the board, RCB spin duo of Washington Sundar and Yuzvendra Chahal worked their magic in the middle overs to put RCB in the commanding position. Chasing a massive target of 195 runs on a slow Sharjah pitch, KKR batsmen lacked the intent and never looked comfortable against quality RCB bowlers. Navdeep Saini dismissed debutant Tom Banton to give RCB an early breakthrough. Shubman Gill and Nitish Rana scored some glorious boundaries in the 5th over bowled by Mohammed Siraj, as KKR finished Powerplay at 43/1. Sundar and Chahal bowled brilliantly and picked wickets at regular intervals as RCB tightened their grip on the match. With required run-rate nearing 18-an-over, Andre Russell smashed three consecutive boundaries off Isuru Udana but the Sri Lankan kept calm and got rid of him in the same over, quashing any hopes of KKR's miraculous comeback. Earlier, AB de Villiers had fired Royal Challengers Bangalore (RCB) to 194/2 on a slow Sharjah track. Batting with skipper Virat Kohli, AB de Villiers changed the momentum towards the end. The KKR bowlers, who were impressive for the majority of the innings, leaked 83 runs in the last five overs. RCB openers Devdutt Padikkal and Aaron Finch gave their side a flying start, adding 47 runs inside the Powerplay without losing any wicket. Andre Russell struck in the eighth over cleaning up Padikkal to give KKR the first breakthrough. Prasidh Krishna cleaned up Finch who was three short of his fifty. (SCORECARD)