RCB hammered 91 runs off the last five overs to reach 213 for four against KKR. 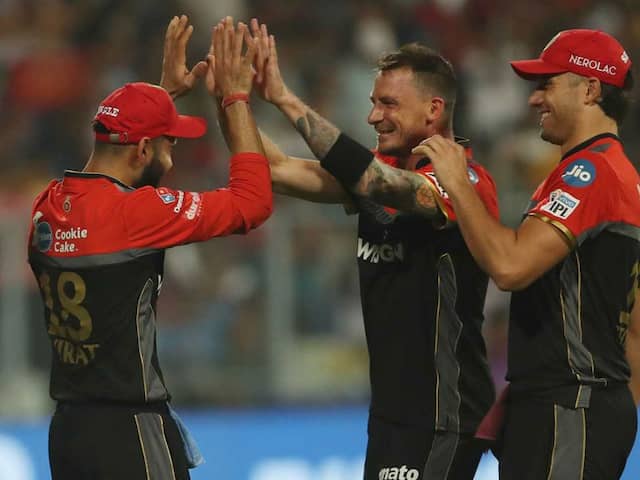 Royal Challengers Bangalore eked out a 10-run win over Kolkata Knight Riders for only their second success of the season after Andre Russell and Nitish Rana nearly pulled off the impossible in the Indian Premier League 2019 in Kolkata on Friday. Needing 113 runs off the last six overs, Russell (65 off 25) and Rana (85 not out off 46) almost got their team over the line but Moeen Ali managed to defend 24 in the final over. The tense climax came after Virat Kohli smashed 100 off 58 balls for his fifth century in the IPL and first this season.

RCB hammered 91 runs off the last five overs to reach 213 for four, their highest total this year. Ali's 66 off 28 while batting alongside Kohli also proved crucial for RCB's cause as they finally managed to defend.

The win keeps RCB mathematically alive in the tournament while KKR suffered their fourth loss in as many games. Following a Kohli special, it was the turn of swing king Dale Steyn to land some body blows on the opposition.

Playing his first game of the season after having come in as a replacement, the South African great removed Chris Lynn and Shubman Gill to leave KKR reeling at 33 for three in five overs. Russell tried his best to pull off another improbable chase for KKR in the company of Nitish Rana but this time it wasn't to be.

Earlier, it was Ali who gave the much needed oxygen to their innings, smashing six sixes and five fours to seize momentum after a slow start. Kohli and Ali shared 90 runs off 43 balls and there was no looking back after Ali's assault.

The match swung in the 16th over when Kuldeep Yadav bled 27 runs with Ali going berserk, smashing the star India spinner for three sixes and two boundaries. The chinaman ended with figures of 1/59 in four overs.

Put in, RCB got off to an ordinary start and the absence of AB de Villiers, who was indisposed following dehydration, was felt very much.

Kohli mistimed the ball with a couple of inside-edges to the boundary, while his left-handed opening parter Parthiv Patel (11 off 11) had a hit-and-miss stay before falling to Sunil Narine inside the powerplay.

In the middle of all this, RCB sent in Akshdeep Nath (13 off 15) at number three keeping the in-form Ali in waiting. RCB made only 42 inside the powerplay.

Kolkata Knight Riders IPL 2019 Kolkata Knight Riders vs Royal Challengers Bangalore, Match 35 Cricket
Get the latest Cricket news, check out the India cricket schedule, Cricket live score . Like us on Facebook or follow us on Twitter for more sports updates. You can also download the NDTV Cricket app for Android or iOS.