Chasing a modest 130, opener Jonny Bairstow smashed a 28-ball 48 to set the foundation for SunRisers Hyderabad. 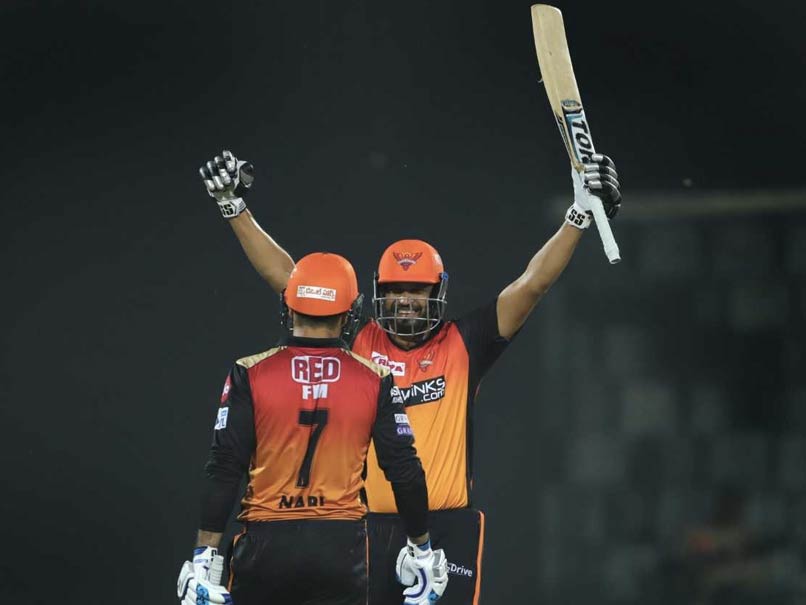 SunRisers Hyderabad dished out an all-round effort to record a five-wicket win.© BCCI/IPL

Afghanistan's Mohammad Nabi played a pivotal role as SunRisers Hyderabad dished out an all-round effort to record a five-wicket win over hosts Delhi Capitals and register their third consecutive victory in the Indian Premier League (IPL) 2019 at the Feroz Shah Kotla on Thursday. Nabi (2/21) took two wickets with the ball and also played a crucial 9-ball 17-run unbeaten knock towards the end to help Sunrisers keep their winning run intact. By virtue of this win, Sunrisers have moved to the top of the eight-team standings with six points from four games.

Chasing a modest 130, opener Jonny Bairstow smashed a 28-ball 48 to set the foundation but SunRisers lost five wickets for 48 runs to slip to 111 for five by the end of the 16th over.

Nabi and Yusuf Pathan (9 not out) then held their nerves to take Sunrisers home, scoring 131 for five in 18.3 overs. The win took Sunrisers' overall head-to-head record against Delhi at the Feroz Shah Kotla stadium to 4-1.

Earlier electing to field, Sunrisers dished out a superb bowling effort on a slow and dry wicket to restrict Delhi to a lowly 129 for eight. It was skipper Shreyas Iyer, who emerged as the highest-scorer for Delhi with a steady 41-ball 43.

Chasing a lowly target, Bairstow got a reprieve early on when Axar Patel dropped a caught and bowl chance in the second over.

The Englishman made Delhi pay for the mistake, blasting a six and a four off Sandeep Lamichhane in the next over. He next took Chris Morris to the cleaners, smashing three boundaries and another hit to the fence in the next over.

Kagiso Rabada was introduced but he too was treated with equal disdain by Bairstow, sending him across the fences thrice as Sunrisers once again didn't lose any wicket in the powerplay, scoring 62 for no loss.

Bairstow was finally dismissed in the seventh over with Rahul Tewatia trapping him in front of the wicket. The opener asked for a review but the decision was not overturned.

Rabada then ended Warner's rampaging run in the tournament by having him caught at mid off. The hosts then removed Manish Pandey (10) , Vijay Shankar (16) and Deepak Hooda (10) quickly to give themselves a chance of a comeback.

Earlier, Sunrisers bowlers exploited the conditions well, making life difficult for the hosts, who simply failed to get going right from the start on a slow wicket.

Skipper Iyer tried to anchor the innings but he didn't get support from the other end. It would have been more embarrassing for Delhi, if not for the cameos from Morris (17 off 15) and Axar Patel (23 not out off 13).

The pace-spin combination of Bhuvneshwar Kumar (2/27) and Nabi gave Sunrisers a good start, restricting Delhi to 19 for one in first four overs.

After conceding a first ball boundary, Bhuvneshwar came back to clean up Prithvi Shaw in the third over.

Iyer then deposited one at the stands after Siddarth Kaul (2/35) was introduced into the attack, while Shikhar Dhawan hit a four with a sweep shot off Nabi.

But another sweep shot proved costly as Nabi had Dhawan caught at short fine leg by Sandeep Sharma. Delhi thus slumped to 36 for two after the end of the powerplay.

A lot was expected from Rishabh Pant but he too departed just after time-out in the 10th over. Sandeep Sharma (1/25) then bamboozled Rahul Tewatia with a knuckle ball as Delhi slipped to 61 for four in 11 overs.

In the 14th over, Manish Pandey took a superb catch at point to remove Colin Ingram off Kaul's ball as Delhi lost half their side for 75. Morris blasted two fours to give some momentum to Delhi's innings but Rashid Khan got rid off Iyer, who tried to sweep across the line and ended up being bowled as Delhi were reduced to 93 for six. With three overs to go, Morris sent Sandeep Sharma over the mid-wicket area to take Delhi across the 100-run mark.

Once Morris was dismissed by Bhuvneshwar in the 19th over, it was upto Axar Patel to take the score to some respectability and he tried his best, smashing a four and two sixes in the last over to take Delhi close to 130-run mark.

Delhi Capitals IPL 2019 Delhi Capitals vs Sunrisers Hyderabad, Match 16 Cricket
Get the latest updates on T20 World Cup, check out the T20 World Cup Schedule and Live Score . Like us on Facebook or follow us on Twitter for more sports updates. You can also download the NDTV Cricket app for Android or iOS.