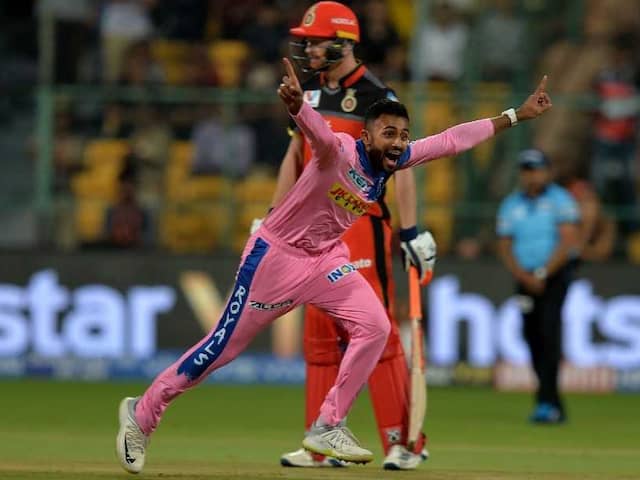 Shreyas Gopal finished his one-over quota with figures of three for 12.© AFP

Shreyas Gopal removed Virat Kohli, AB de Villiers and Marcus Stoinis to claim his maiden Indian Premier League (IPL) hat-trick during a rain-hit fixture between Rajasthan Royals and Royal Challengers Bangalore at M Chinnaswamy Stadium on Tuesday. Gopal's hat-trick was the second of ongoing IPL 2019 after Sam Curran's hat-trick in Kings XI Punjab's fixture against Delhi Capitals at in Mohali led his team to a win in the final over. With the match reduced to five-over-per-side, Gopal, whose hat-trick is 19th in IPL history, finished his one-over quota with figures of three for 12.

Shreyas Gopal also became only the third Indian player after Amit Mishra and Yuvraj Singh to pick up multiple hat-tricks in the Twenty20 format. Gopal had bagged a hat-trick in the Syed Mushtaq Ali Trophy 2018-19 for Karnataka against Haryana.

As far as the match is concerned, Rajasthan Royals captain Steve Smith won the toss and decided to field.

Kohli then hit Shreyas Gopal for his third six but was dismissed for a seven-ball 25. On the next delivery, Gopal removed AB de Villiers.

Marcus Stoinis walked out to face the hat-trick ball and ended up hitting it straight to the fielder at mid-off.

Chasing 63 to win, the visitors were 41/1 in 3.2 overs when the rain returned to the Chinnaswamy with Sanju Samson (28 off 13) being their top-scorer.

AB de Villiers Marcus Stoinis IPL 2019 Cricket Royal Challengers Bangalore vs Rajasthan Royals, Match 49
Get the latest Cricket news, check out the India cricket schedule, Cricket live score . Like us on Facebook or follow us on Twitter for more sports updates. You can also download the NDTV Cricket app for Android or iOS.