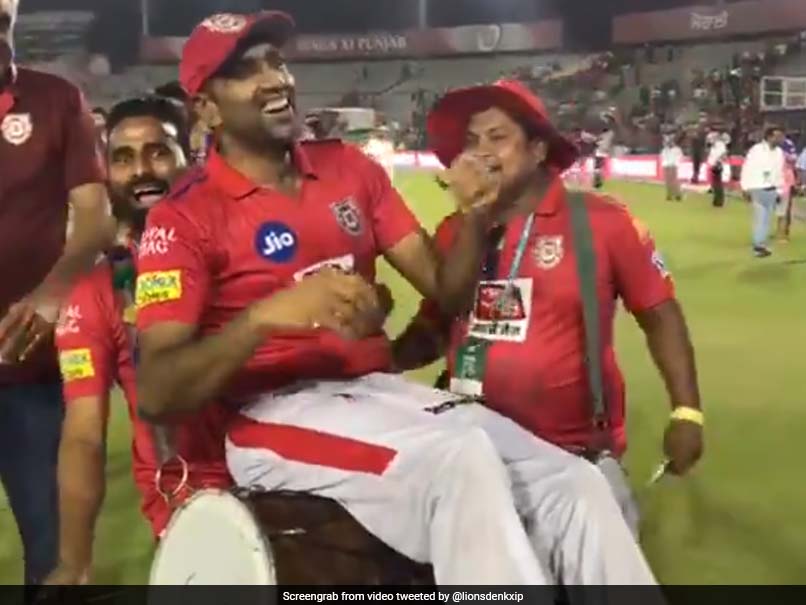 Ravichandran Ashwin even sat on the top of a 'dhol' to celebrate the victory.© Twitter

Before the match in Mohali, power-hitting KXIP opener Chris Gayle was also seen shaking a leg just after stepping out of the team bus.

"The customary welcome for the #UniverseBoss," the Indian Premier League captioned the video on Twitter.

Gayle, who is the first player to hit 300 sixes in IPL, has scored 4,346 runs in 120 matches at a strike rate of over 150. The Windies batsman, along with David Warner, is the only overseas players to have scored 4,000 runs in the IPL.

After being asked to bat in Mohali, Kings XI Punjab rode on a brilliant half-century by KL Rahul and a couple of sixes by skipper Ashwin to post a competitive 182 for six.

Rajasthan Royals managed to score 170 for seven in their allotted 20 overs and suffered a 12-runs defeat.

Currently, KXIP are ranked fourth in the IPL 2019 points table with 10 points.

However, Rajasthan Royals suffered their sixth loss on Tuesday. The Ajinkya Rahane-led side will need to pull up their socks if they have to salvage any hopes of making it to the knockout stage.

Ravichandran Ashwin IPL 2019 Cricket Kings XI Punjab vs Rajasthan Royals, Match 32
Get the latest updates on T20 World Cup, check out the T20 World Cup Schedule and Live Score . Like us on Facebook or follow us on Twitter for more sports updates. You can also download the NDTV Cricket app for Android or iOS.