MS Dhoni smiled. Seconds ticked by. As if he had no care in the world, he then asked Deepak Chahar, "Sure?" 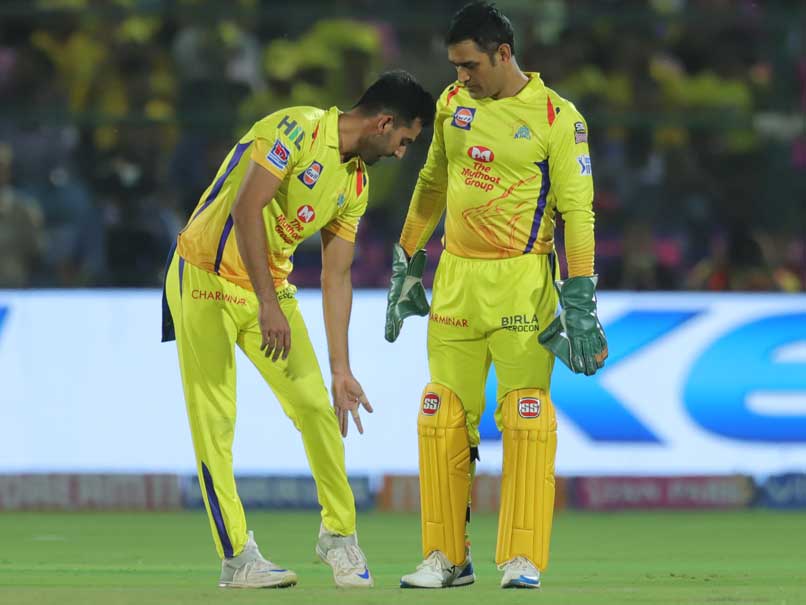 Deepak Chahar, sure that he had got his man, rushed to MS Dhoni to present his point of view© BCCI/IPL

MS Dhoni and Chennai Super Kings strike bowler Deepak Chahar have exhibited magnificent rapport in IPL 2019. In the match against Rajasthan Royals in Jaipur on Thursday too, there was a special moment on display between the two of them. Chahar convinced his skipper to take a review of an lbw call against Ajinkya Rahane which had been turned down by the umpire. Dhoni, usually a very astute judge of whether the umpire's call should be challenged, did not look very convinced initially but took his bowler's word just as the stipulated ten seconds finished. Chahar turned out to have been right though, as replays showed that RR skipper Ajinkya Rahane was indeed out lbw.

The incident happened in the third over of the match, just as Rajasthan Royals openers Jos Buttler and Ajinkya Rahane looked set to take their team to a big score.

With the score at 31 for no loss at the time and Rahane looking to not waste any time, Chahar was varying his pace and length. Rahane stepped out to meet the fifth ball of the over and missed an attempted flick.

The ball hit his pad, but the fact that he was shuffling out of his crease at the time of the impact between ball and pad probably convinced umpire Bruce Oxenford that it was not out.

Chahar, immediately convinced that he had got his man, rushed to Dhoni to present his point of view, gesticulating wildly. Dhoni smiled, seemingly telling Chahar how the ball might have missed the stumps. Seconds ticked by. As if he had no care in the world, he then asked Chahar, "Sure?"

Then, just as the ten seconds got over, Dhoni made the T-sign, signalling that CSK were opting to take the review and consequently the end of Ajinkya Rahane's innings.

Ajinkya Rahane Deepak Chahar IPL 2019 Cricket
Get the latest updates on SA vs IND 2021-22, check out the Schedule and Live Score . Like us on Facebook or follow us on Twitter for more sports updates. You can also download the NDTV Cricket app for Android or iOS.