Kuldeep Yadav was in tears after Moeen Ali's brutal onslaught in the 16th over, which yielded 27 runs for RCB. 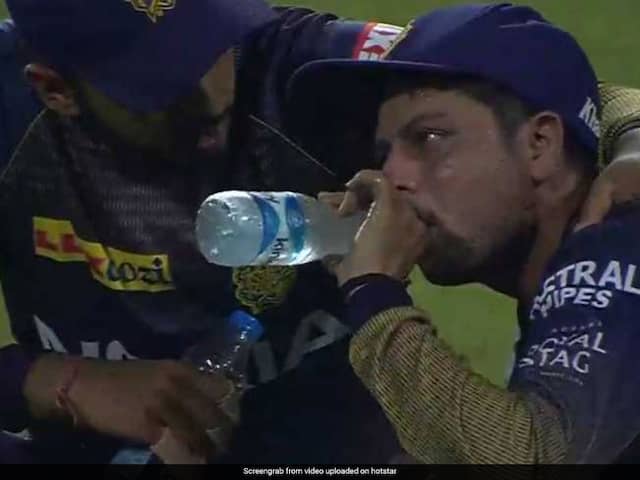 Kuldeep Yadav was literally left in tears after England all-rounder Moeen Ali launched a fearsome attack on the India spinner during the KKR vs RCB IPL 2019 match at the Eden Gardens on Friday night. Kuldeep Yadav was taken to the cleaners by the Englishman, smashing two fours and three sixes in the 16th over of RCB's inning. Kuldeep Yadav was caught on camera in tears and being consoled by KKR teammate Nitish Rana. Kuldeep Yadav did dismiss Moeen Ali on the final ball of the over but by then the damage had been done and it seemed to weigh heavily on the left-arm wrist spinner.

After the completion of 17 overs, replays on the broadcast channel showed Kuldeep Yadav sitting on his haunches all teary-eyed, having a sip of water with Nitish Rana by his side.

Fans on Twitter were left heartbroken by Kuldeep Yadav's reaction, posting messages of support for the India spinner.

To the people trolling Kuldeep Yadav, you're trolling someone who is currently in the Top 10 T20 bowlers rankings and is going to be the Lead spinner in the World Cup'19 campaign for team India.

Awhhh Kuldeep Yadav, it's okay man! Everyone has a bad day... (especially if you are up against the run machine)!

Ughhh it hurts to see the Men in Blue upset and cry/ in tears!

While I really enjoyed Virat's batting innings thoroughly, a part of me felt really sad for Kuldeep Yadav.
He was in tears when he was taken apart by Moeen Ali.
Chin up, young man.
Brighter and better days are to follow. You are an absolute star#KKRvRCB #VIVOIPL

In the commentary box, former Zimbabwe cricketer Mpumelelo "Pommie" Mbangwa too spoke in support of Kuldeep.

"Being consoled there by Nitish Rana. Yup it hurts. No doubt about it. He is a top bowler is Kuldeep Yadav but you have to be philosophical about it. It can happen to you," said Mbangwa.

Kuldeep Yadav's over served as the much-needed momentum shift for RCB as they smashed KKR all over the park in the final few overs to post a formidable total.

Kuldeep Yadav bled 27 runs (26 off the bat plus 1 wide) in the 16th over with the KKR spinner ending the match with figures of 1/59 -- the joint-most expensive spell by a spin bowler in IPL history.

Despite Andre Russell and Nitish Rana's heroics, KKR couldn't get over the line, giving RCB only their second win of the season.

Kolkata Knight Riders IPL 2019 Kolkata Knight Riders vs Royal Challengers Bangalore, Match 35 Cricket
Get the latest Cricket news, check out the India cricket schedule, Cricket live score . Like us on Facebook or follow us on Twitter for more sports updates. You can also download the NDTV Cricket app for Android or iOS.