Krunal Pandya made headlines as he served a 'mankading' warning to MS Dhoni during the MI-CSK IPL 2019 match. 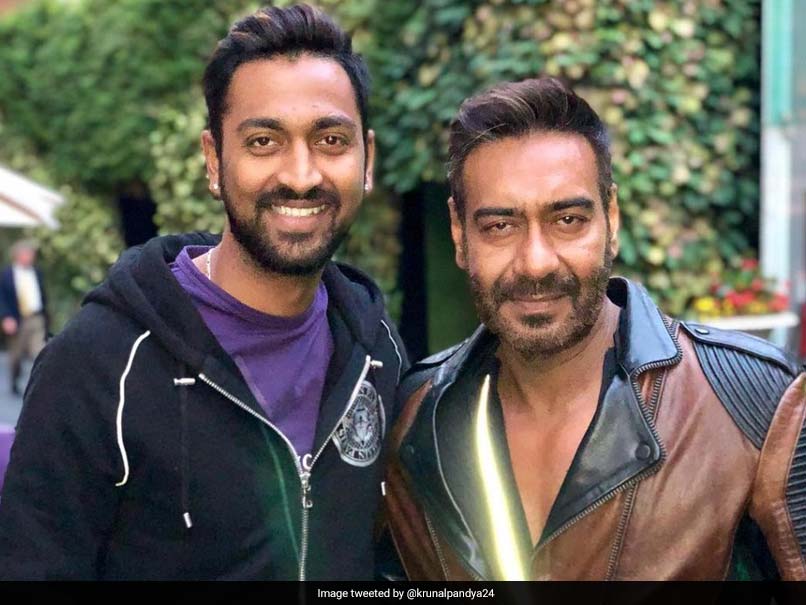 Krunal Pandya, who scored 42 runs to help Mumbai Indians post a competitive total of 170 against the Chennai Super Kings in their Indian Premier League (IPL) encounter on Wednesday, is a huge fan of Bollywood star Ajay Devgn. On the actor's 50th birthday, Krunal Pandya took to Twitter and posted a selfie with Ajay Devgn and wrote an adorable message with it. Moreover, Krunal Pandya revealed that he thinks that Ajay Devgn is his doppelganger. "Singham Superstar and my doppelganger Happy birthday to one of my favourite actors @ajaydevgn #HappyBirthdayAjayDevgn," Krunal Pandya tweeted.

Happy birthday to one of my favourite actors @ajaydevgn ???? #HappyBirthdayAjayDevgn pic.twitter.com/St3SV64z1Z

The actor, who is not very active on social media, replied to the cricketer's message in the sweetest way possible. He offered Krunal Pandya to feature in a double role movie with him. "Thanks Krunal.. Ek double role ki film saath mein karte hain!," Ajay Devgn replied.

However, the conversation did not end there.

Krunal Pandya quite liked the idea of featuring in a movie alongside the veteran actor but he had a condition.

Krunal Pandya replied that will accept the offer if the actor agrees to support Mumbai Indians at the Wankhede Stadium.

On Wednesday, MS Dhoni invited Mumbai Indians to bat but the hosts got off to a poor start losing openers Quinton de Kock (4) and Rohit Sharma (13) cheaply before Suryakumar Yadav and Krunal Pandya steadied the ship for the hosts.

But, it was a late flourish from Hardik Pandya and Kieron Pollard that helped the hosts set a fighting target of 171.

Chennai Super Kings Krunal Pandya IPL 2019 Cricket Mumbai Indians vs Chennai Super Kings, Match 15
Get the latest updates on IPL 2021, check out the IPL 2021 Schedule and Indian Premier League Live Score . Like us on Facebook or follow us on Twitter for more sports updates. You can also download the NDTV Cricket app for Android or iOS.