MS Dhoni once again proved that his reflexes are strong and his mind is as sharp as ever. 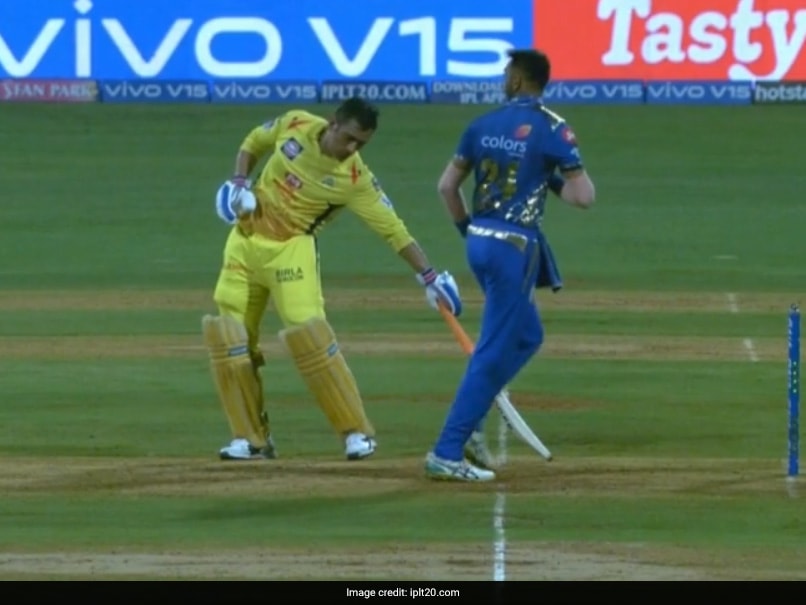 Krunal Pandya stopped in his tracks and gave a 'mankading' warning to MS Dhoni.© Screengrab: www.iplt20.com

MS Dhoni is extremely watchful whenever he is on the cricket field. Even after playing international cricket for over 15 years, MS Dhoni does not take things lightly and stays alert whether he is behind the stumps or in front on them. During an Indian Premier League (IPL) match between Chennai Super Kings (CSK) and Mumbai Indians on Wednesday the 37-year-old once again proved that his reflexes are strong and his mind is as sharp as ever. Bowling to Kedar Jadhav, Mumbai Indians all-rounder Krunal Pandya completed his run-up but never released the ball to inform MS Dhoni to stay in the crease. Going with the "spirit of the game", Pandya stopped in his tracks and gave a 'mankading' warning to Dhoni. However, Dhoni was in his crease all the time.

Impressed by Dhoni's alertness commentator Sanjay Manjrekar said that the you will rarely see the former India captain do something that is incorrect.

"Right instincts for Dhoni. The bat was inside, the ball was in the scene. He does most things right. Just out of instincts, with Dhoni very rarely will you see him do something that is incorrect," Manjraker said.

As far as the match is concerned, after being put in to bat by MS Dhoni, Mumbai Indians were struggling to post a competitive score against the defending champions.

But, a late flourish from Hardik Pandya and Kieron Pollard helped the hosts set a fighting target of 171.

MS Dhoni IPL 2019 Cricket Mumbai Indians vs Chennai Super Kings, Match 15
Get the latest updates on IPL 2021, check out the IPL 2021 Schedule and Indian Premier League Live Score . Like us on Facebook or follow us on Twitter for more sports updates. You can also download the NDTV Cricket app for Android or iOS.