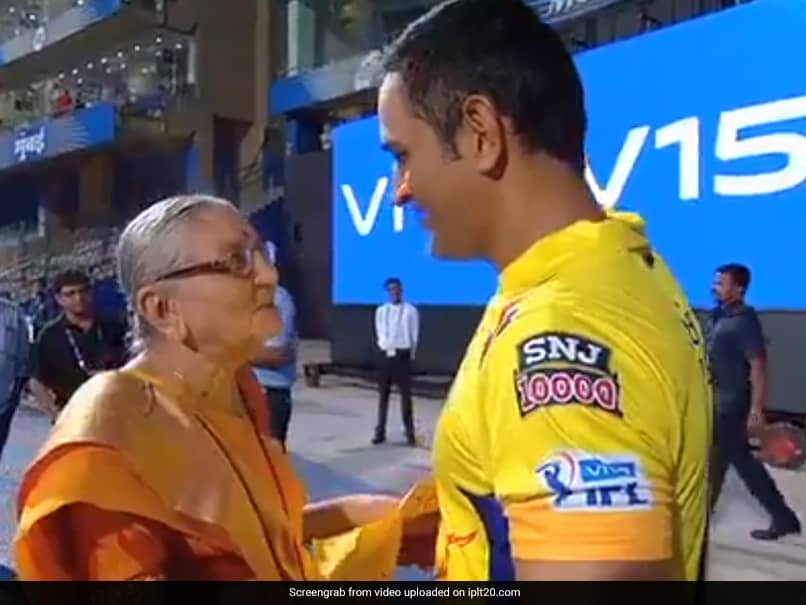 MS Dhoni's gesture towards an elderly fan shows exactly why he is a huge crowd favourite.© Screengrab: www.iplt20.com

MS Dhoni is arguably one of the most popular cricketers in India on and off the pitch. The Chennai Super Kings skipper is immensely loved all over the country and his recent gesture towards an elderly fan shows exactly why he is a huge crowd favourite. The Indian Premier League (IPL) Twitter handle shared a video in which MS Dhoni can be seen taking out time to meet the lady who waited patiently for the former India skipper. After the match got over on Wednesday, Dhoni made his way down the stairs from the team dressing room and met with the lady and a young girl who accompanied her. Dhoni spoke to them at length and then took a selfie with the two and signed a CSK jersey for them.

Heartwarming to see this gesture from the legend in Mumbai ?? @ChennaiIPL #VIVOIPL pic.twitter.com/6llHlenIzL

MS Dhoni suffered his first defeat of IPL 2019 as Mumbai Indians won the match by 37 runs at the Wankhede stadium.

Chasing 171 for victory, Mumbai Indians restricted the Chennai Super Kings to 133 for 8 in 20 overs with Hardik Pandya and Lasith Malinga bagging three wickets each.

"I think quite a few things went wrong for us. I think we started off well and 12th-13th over also we were on the mark, but after that there were some drops and misfields. The death bowling also didn't come off. It was slightly tough on them," Dhoni said after the match.

"We do more one-on-one stuff than team meetings. On a wicket like this, what is important is carefully study which boundaries they could have cut off, and where is the error in execution. Momentum totally depends on where you are at," MS Dhoni added.

MS Dhoni IPL 2019 Cricket Mumbai Indians vs Chennai Super Kings, Match 15
Get the latest updates on IPL 2020, check out the IPL Schedule for 2020 and Indian Premier League (IPL) Cricket live score . Like us on Facebook or follow us on Twitter for more sports updates. You can also download the NDTV Cricket app for Android or iOS.