Alzarri Joseph has joined the Mumbai Indians squad for IPL 2019, but it remains to be seen if he is played against RCB. 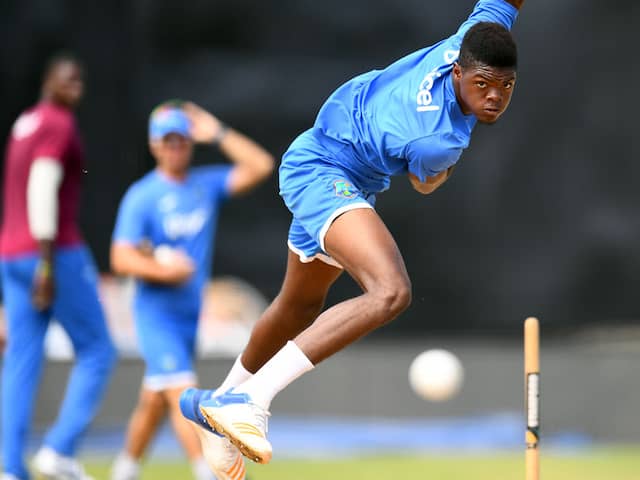 Alzarri Joseph, 22, has not played in the IPL before this© AFP

Mumbai Indians have added 22-year-old West Indies pace bowler Alzarri Joseph to replace injured pacer Adam Milne for the IPL 2019 season. The injury-hit Mumbai franchise was also without Lasith Malinga till Thursday, who had said he will be available to play in the IPL only after the first six rounds. In MI's first match, a 37-run defeat to Delhi Capitals, Mitchell McLenaghan and the unheralded Rasikh Salam shared new ball duties. Joseph's addition will therefore come as a welcome boost to MI.

Speaking in a video tweeted out by Mumbai Indians on Thursday, Joseph says, "Playing in the IPL is something I always wanted to do, for the experience. I'm happy to be here now."

Joseph has featured in nine Tests and 16 One-Day Internationals for West Indies so far. This will be his first appearance in the IPL.

Joseph has arrived in India fresh off a very successful first class season for Leeward Islands in the West Indies. In his two most recent matches, he has recorded figures of 4/28, 3/36 and 5/66.

He was also part of the West Indies team which played out a very eventful Test series against England in January this year, braving through news of his mother's death to play an instrumental role in the home team's brave efforts. He took 10 wickets in the series, even as England eked out a narrow 2-1 victory.

Mumbai Indians also suffered a heart-stopping injury scare in their first match against Delhi Capitals, as Jasprit Bumrah hurt his shoulder and went off the field. It was later diagnosed that Bumrah had suffered spasms and will be fit in time to play the second match on Thursday against Royal Challengers Bangalore.

It remains to be seen if the young Joseph is played against RCB or if he is given a little more time to settle into the rythm of India's showpiece T20 tournament.

Mumbai Indians Alzarri Joseph IPL 2019 Cricket
Get the latest updates on IPL 2020, check out the IPL Schedule for 2020 and Indian Premier League (IPL) Cricket live score . Like us on Facebook or follow us on Twitter for more sports updates. You can also download the NDTV Cricket app for Android or iOS.