Faf du Plessis and Shane Watson stitched together an 81-run opening stand with some clean hitting as CSK recorded their 100th win in IPL. 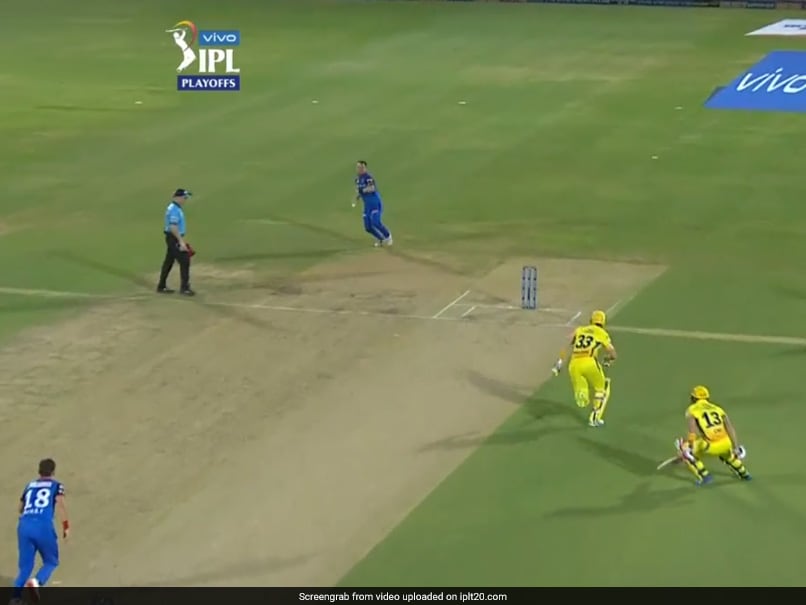 Chennai Super Kings made it to their record eighth Indian Premier League (IPL) final when they defeated Delhi Capitals (DC) by six wickets in the second qualifier that was played in Visakhapatnam on Friday. Although, CSK completely dominated the opposition during the tie, they survived a massive scare in the first over of their chase to reach the final against Mumbai Indians. Needing 148 to win, openers Faf du Plessis and Shane Watson were involved in a huge mix-up when they were stuck in the middle of the pitch only to witness the Delhi Capitals fielders miss running them out on both the ends.

WATCH: The 1st over confusion galore

After that, there was no problem whatsoever for the defending champions, who achieved the target with an over to spare.

After starting cautiously, Du Plessis (50 off 39 balls) and Watson (50 off 32 balls) stitched together an 81-run opening stand with some clean hitting as CSK recorded their 100th win in IPL.

"The way Faf got going, I could take my time getting into rhythm...I could take a couple more balls to find my feet," Watson said after the win.

"There's huge positives about age and experience, and that's the way CSK has played, from the top with MS (Dhoni) and Stephen Fleming (coach)," Watson added.

MS Dhoni's Chennai Super Kings will take on Rohit Sharma's Mumbai Indians in IPL 2019 final that will be played in Hyderabad on Sunday.

Chennai Super Kings and Mumbai Indians will fight for supremacy with three titles each in the world's most popular T20 tournament that started in 2008.

Shane Watson IPL 2019 Cricket Chennai Super Kings vs Delhi Capitals, Qualifier 2
Get the latest updates on IPL 2021, check out the IPL 2021 Schedule and Indian Premier League Live Score . Like us on Facebook or follow us on Twitter for more sports updates. You can also download the NDTV Cricket app for Android or iOS.