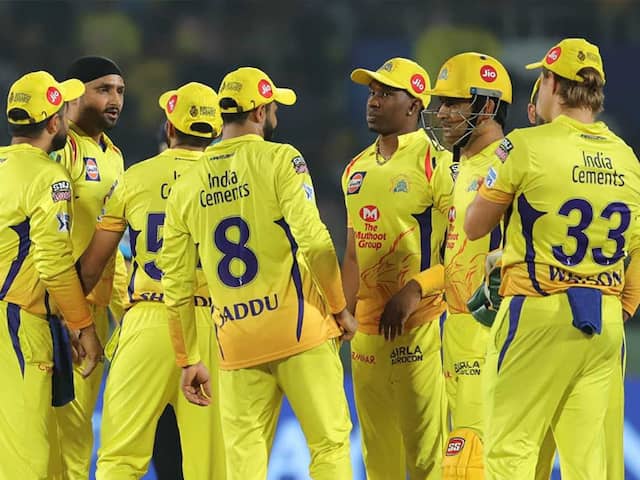 CSK will play Mumbai Indians in the final of IPL 2019 in Hyderabad on Sunday.© BCCI/IPL

Defending champions Chennai Super Kings (CSK) produced a clinical performance to beat Delhi Capitals (DC) by six wickets and enter their eighth final of the Indian Premier League, in Vizag on Friday. CSK dished out a disciplined bowling and fielding effort to first restrict DC to 147 for nine and then chased down the target with ease, reaching 151 or four in 19 overs. Dwayne Bravo (2/19), Ravindra Jadeja (2/23), Deepak Chahar (2/28) and Harbhajan Singh (2/31) shared eight wickets between them to keep DC in check after opting to bowl. CSK will play Mumbai Indians in the final of the ongoing IPL in Hyderabad on Sunday.

The two teams have met each other thrice in summit clashes of the tournament earlier with MI finishing on the winning side twice while the Chennai outfit came out triumphant once. While CSK won the final battle in 2010, MI finished on the victorious side in 2013 and 2015.

The duo started cautiously before opening up to not allow any DC bowler to settle down. du Plessis was the aggressor among the duo, scoring 50 off 39 balls with the help of seven boundaries and one six while Watson played the second fiddle initially.

But just after notching up his 12th IPL fifty, du Plessis departed while going for a big shot over deep square-leg off Trent Boult (1/20), only to be holed out by Keemo Paul.

After du Plessis' dismissal, Watson took the centrestage and struck Paul for one four and three sixes to pile up 25 runs off the 12th over and also registered his half-century off 31 balls in the process.

Watson looked in a hurry to finish off the chase and that eventually led to his downfall, caught by Boult off Amit Mishra (1/21) in the second ball of the next over.

Suresh Raina (11) and skipper Mahendra Singh Dhoni (9) got out cheaply but Ambati Rayudu (20 not out) remained at the crease to ensure a comfortable win for the three-time champions.

Earlier sent into bat, DC made a shaky start with Prithvi Shaw (5) and Shikhar Dhawan (18 off 14) adding 21 runs in 2.3 overs before the former was caught plumb in front of the wicket by Chahar.

Shaw's dismissal opened the floodgates as DC lost three wickets in quick time to slump to 75 for four in 11.3 overs.

Dhawan was the next to depart, caught by Dhoni off Harbhajan and then Colin Munro (27) was holed at deep square-leg by Bravo off Jadeja as the South African went for a slog sweep.

Skipper Shreyas Iyer (13 of 18) tried to anchor the innings but he too fell while going for a big shot, caught by Raina off Imran Tahir (1/28) in the 12th over.

To make matters worse for DC, new man in Axar Patel departed in the next over, hitting a short delivery of Bravo straight to Tahir at third man.

Rishabh Pant (38 off 25) and Sherfane Rutherford (10) shared 22 runs for the sixth wicket but CSK didn't allow the Delhi outfit to get any momentum, picking up wickets at regular intervals to rattle their innings.

Rutherford became Harbhajan's second victim, followed by Paul who was cleaned up by Bravo's perfect yorker in the 18th over.

The onus was on hard-hitting Pant to take DC to a challenging total but he too failed to cope up with the pressure, caught by Bravo at long-on off Chahar.

Towards the end, Mishra (6 not out) and Ishant Sharma (10 not out off 3 balls) used their long handles to great effect and struck some lusty blows to take the Delhi side close to the 150-run mark.

Shane Watson Shreyas Iyer ACA-VDCA Stadium, Visakhapatnam IPL 2019 Cricket
Get the latest Cricket news, check out the India cricket schedule, Cricket live score . Like us on Facebook or follow us on Twitter for more sports updates. You can also download the NDTV Cricket app for Android or iOS.