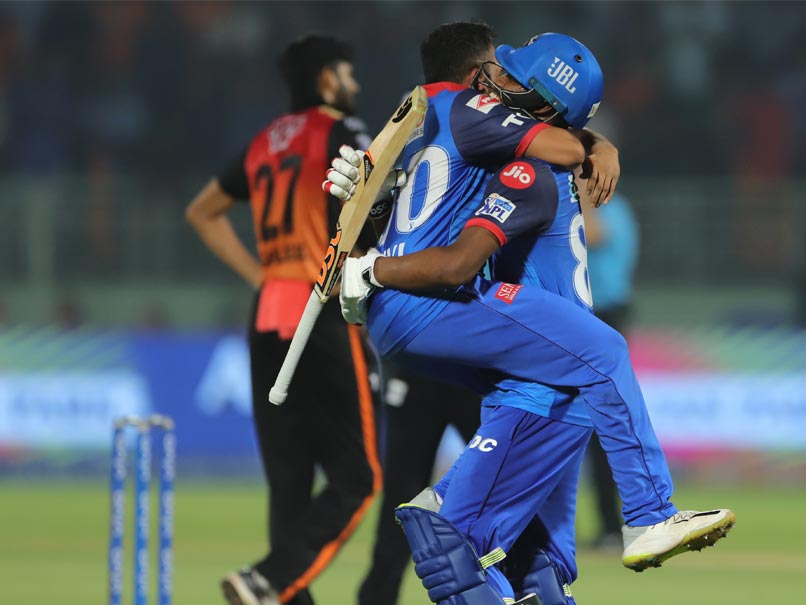 Young Keemo Paul gave the final touches to a Rishabh Pant blitzkrieg as Delhi Capitals beat Sunrisers Hyderabadby two wickets in a nerve-wracking IPL Eliminator in Vizag on Wednesday. Chasing a target of 163, Delhi Capitals, who had lost the way after a blazing start, were brought to cusp of victory by young Pant, who smashed 49 off 21 balls with five sixes as West Indies' Paul finished it off the penultimate ball of the innings with a boundary off Khaleel Ahmed.

Pant, who resurrected the innings from a orecarious 111 for 5 couldn't have chosen a better venue than chairman of selectors MSK Prasad's home ground to drive home a point on his much debated World Cup exclusion.

It was a sense of deja vu for Paul, who had similarly hit winning runs in an U-19 World Cup final in 2016 when Khaleel was the bowler in the final over.

Needing 34 from three overs, Pant showed brilliant game awareness to target Sunrisers' weakest link Basil Thampi, smashing him for 21 runs in the 18th over as he brought the game on even keel.

A six off Bhuvneshwar Kumar brought the equation down to five runs before Pant in his bid to finish the game was holed out with five required from seven balls.

When the chase started, Prithvi Shaw (56 off 38 balls) was in his element in the fifth over bowled by Bhuvneshwar Kumar when he first played a flowing cover drive, followed by a ramp shot for six over third man and a lofted boundary over mid-off to put Sunrisers on the backfoot.

One of the most regal shots played by Prithvi was a six over long-on when he gave off-spinner Deepak Hooda the charge. In the same over, Wriddhiman Saha effected a smart stumping down leg-side to see the end of Dhawan even as Prithvi completed his 50 off 31 balls.

However just like Sunrisers, Delhi also lost momentum at start of the back-10 with Khaleel's extra pace and bounce accounting for Prithvi and skipper Shreyas Iyer (8). Prithvi's innings had six fours and two sixes.

Earlier, Delhi Capitals bowlers pulled the plug in the middle overs, restricting Sunrisers Hyderabad to a par score of 162 for 8 on a good batting surface after opting to field.

Ishant got rid of Wriddhiman Saha (8), who offered a simple catch to Shreyas Iyer at mid-off. Martin Guptill (36, 19 balls) hit three sixes including two off his countrymate Trent Boult to set the pace in the Powerplay overs which yielded 54 runs.

Credit to Delhi bowlers as the next 14 overs produced only 108 runs. As Guptill was in attacking mood, it gave the normally flamboyant Manish Pandey (30, 36 balls) to play around before the spinners came in operation.

Axar and Mishra choked the run-flow and Guptill was accounted for trying to slog sweep the leg-spinner. His innings had four sixes apart from a boundary.

Sunrisers suddenly lost momentum in those middle overs as Pandey and Kane Williamson (27 off 26 balls) added only 34 runs in seven overs before he Karnataka batsman was dismissed by a Keemo Paul slower delivery.

Pandey was holed out by Sherfane Rutherford at long-on boundary making it 90 for 3 for Sunrisers. Ishant coming in his second spell bowled the perfect inswinging yorker to send back Williamson.

Martin Guptill ACA-VDCA Stadium, Visakhapatnam IPL 2019 Cricket
Get the latest updates on ICC Women's Cricket World Cup 2022 and IPL 2022, check out the Schedule , Live Score and IPL Points Table. Like us on Facebook or follow us on Twitter for more sports updates. You can also download the NDTV Cricket app for Android or iOS.