Suryakumar batted in a copybook fashion scoring an unbeaten 71 off 54 balls. 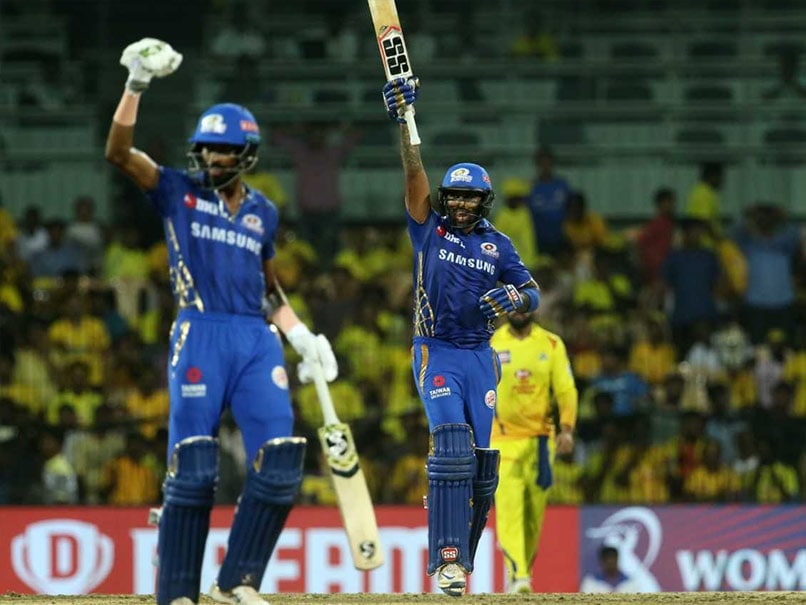 The enormously talented Suryakumar Yadavplayed one of his finest knocks on a challenging track as Mumbai Indians beat Chennai Super Kings by six wickets in the first Qualifier, entering IPL final for the fifth time on Tuesday. On a sluggish pitch, which offered considerable turn and odd bounce, Suryakumar batted in a copybook fashion scoring an unbeaten 71 off 54 balls with MI reaching the target in 18.3 overs.

However CSK will get another chance to make it to their eighth summit clash as they will now play the second Qualifier against the winner of the 'Eliminator' between Delhi Capitals and Sunrisers Hyderabad.

The target of 132 wasn't a big one but once the below-par Chepauk pitch was factored in, the chasing team had its own set of challenges. With senior players Rohit Sharma (4) and Quinton de Kock (8) returning quickly, Surya and Ishan Kishan (28, 31 balls) traded their natural flair for caution adding 80 runs that set the platform.

While Surya hit 10 fours, the normally aggressive Kishan had three fours and a six in his innings. While Imran Tahir (2/33 in 4 overs) dismissed Kishan and Krunal Pandya (0) off successive deliveries in the 14th over, it was more a of minor scare as Surya anchored the chase with ease in Hardik Pandya's company.

The best part about Surya's batting was how late he played both Tahir and Ravindra Jadeja (0/18 in 4 overs) whenever they got the ball to turn away from the right-hander, playing it past the short third-man fielder.

The best part was not taking undue risks against Jadeja, who looked menacing on this track. When Tahir flighted, he would whip him through mid-wicket.

Deepak Chahar after getting Rohit's wicket erred in line and proved to be costly. Harbhajan Singh (1/25 in 4 overs) finished his quota primarily when at least one left-hander was at the crease.

In the end, the difference was created by the three Mumbai Indians spinners Rahul Chahar (2/14 in 4 overs), Krunal Pandya (1/21 in 4 overs) and Jayant Yadav (1/25 in 3 overs), who gave away only 60 runs in the 11 overs between them taking four wickets.

CSK were 10 runs short of the par-score even on a challenging track where Surya made batting look easy. Earlier, Dhoni failed to launch a brutal assault on a sluggish pitch but did enough in company of Ambati Rayudu to propel Chennai Super Kings to 131 for 4, which was more than a fighting total in testing conditions.

The CSK total was built largely on a fifth wicket stand of 66 off 48 balls between Dhoni (37 no off 29 balls) and Rayudu (42 no off 37 balls) when other batsmen found going tough.

Dhoni smashed Lasith Malinga for two huge sixes in the penultimate over to provide impetus to the CSK innings, which was stymied by the MI bowlers, especially the spinners.

MI leg-spinner Rahul continued his impressive season, with a superb spell, keeping the batsmen on a leash with turn and bounce.

CSK didn't get off to a good start, losing three wickets in the powerplay, as MI skipper Rohit Sharma used five different bowlers in the first five overs.

The visiting team kept things under control in the powerplay, restricting CSK to 32 runs while picking up three wickets.

At the halfway stage, CSK barely managed to reach 50, which was a sign of their struggles.

MA Chidambaram Stadium, Chennai IPL 2019 Cricket
Get the latest updates on ICC Women's Cricket World Cup 2022 and IPL 2022, check out the Schedule , Live Score and IPL Points Table. Like us on Facebook or follow us on Twitter for more sports updates. You can also download the NDTV Cricket app for Android or iOS.