Watch: Rohit Sharma Dedicates Fifty To Daughter Samaira, Spends Time With Her After The Match

This was Rohit Sharma's second half-century of IPL 2019. 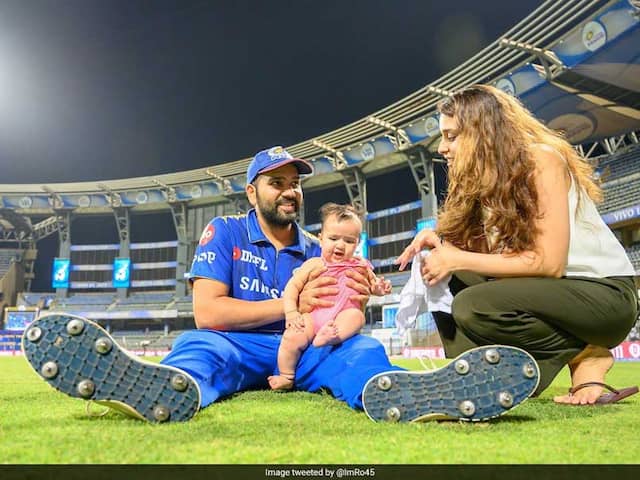 Mumbai Indians (MI) skipper Rohit Sharma dedicated his half-century scored against two-time champions Kolkata Knight Riders (KKR) in Mumbai on Sunday to his daughter Samaira. After his fifty, he used a sweet gesture to signal the same. Unfortunately, for him when he did that her daughter was sleeping but Rohit more than made up for that as he brought her to the ground after the match and spent some time with her.

This one's for you baby Samaira pic.twitter.com/HCrBWfYjMy

IPL 2019 has been a mixed season for Rohit personally as he has only scored 386 runs in 13 innings. This was his second fifty of IPL 2019 and it was more special because it came on his home turf, in front of his wife Ritika Sajdeh and Samaira.

Rohit even tweeted a picture of him, Samaira and wife Ritika Sajdeh and captioned it: "At the end, this is what matters the most."

At the end, this is what matters the most pic.twitter.com/qnoB4jeQP9

Playing in front of his wife and daughter, the India vice-captain led from front and helped his side defeat KKR and finish as the table toppers, with 18 points courtesy nine points from 14 league matches.

Wankhede IPL 2019 Cricket
Get the latest Cricket news, check out the India cricket schedule, Cricket live score . Like us on Facebook or follow us on Twitter for more sports updates. You can also download the NDTV Cricket app for Android or iOS.