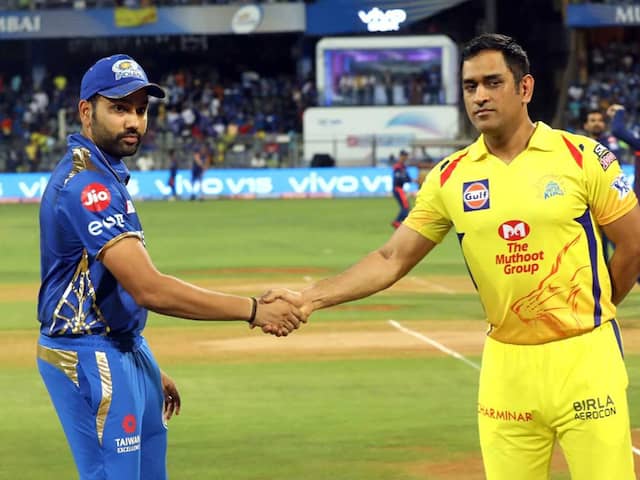 Mumbai Indians won both their encounters against CSK in the preliminary phase.© AFP

Mumbai Indians (MI) registered convincing victories over Chennai Super Kings (CSK) in both home and away matches of the ongoing Indian Premier League (IPL) 2019. However, the initial success doesn't guarantee Mumbai Indians another win over CSK at their home ground MA Chidambaram Stadium. The two teams will face off in the IPL 2019 Qualifier 1 on Tuesday. The losing team will then take on the winner of the Eliminator, to be played between Delhi Capitals vs SunRisers Hyderabad, in the Qualifier 2 in Visakhapatnam on Friday.

CSK were handed a reality check in their last league fixture, though they would bank on home advantage to seal their place in the summit clash.

The MS Dhoni-led CSK has been patchy after a strong start and finished its league engagements with a six-wicket defeat to Kings XI Punjab at Mohali on Sunday.

But CSK will be happy to return to their den to take on table-toppers MI, probably their biggest IPL rivals, to decide which team seals a spot in the May 12 final.

CSK boasts of a tremendous record at home this season, winning six of its seven games at the MA Chidambaram Stadium and come Tuesday, it will act as a big advantage for the hosts.

The CSK top-order has fired in fits and starts in the league phase and will need to come out all guns blazing against a formidable MI bowling attack that includes Jasprit Bumrah (17 wickets), Lasith Malinga (15 wickets), the Pandya brothers (Hardik 14 wickets and Krunal 10 wickets), leggie Rahul Chahar (10 wickets) and possibly Mitchell McClenaghan.

Skipper Dhoni (CSK's highest run-getter with 368 runs from 12 matches, 3 fifties) has been the mainstay of a rather inconsistent CSK batting unit and along with openers Shane Watson and Faf du Plessis and Suresh Raina holds the key in Saturday's game as the usually fluent Ambati Rayudu has struggled to get going.

CSK, however, will miss the services of the Kedar Jadhav, who sustained a freak shoulder injury in the match against Kings XI. But Jadhav wasn't in the best of form and his absence would open up a spot for either Murali Vijay or Dhruv Shorey.

Bowling has been CSK's strong point so far this season and becomes even more potent on MA Chidambaram stadium's sluggish wicket.

Imran Tahir (21 scalps), the second highest-wicket taker this season after Kagiso Rabada (25), has been at the forefront of an effective CSK spin trio, also including veteran Harbhajan Singh and Ravindra Jadeja (both with 13 wickets each).

The success of Tahir and the rest against the powerful MI batting line-up could very well determine the course of the match.

MI captain Rohit Sharma (386 runs), the impressive Quinton de Kock (492, third leading run-scorer), Hardik Pandya (380) and Kieron Pollard will be hard to stop once they get going and CSK's bowlers have a tough task at hand.

The onus would also be on the ever-improving Deepak Chahar, who has taken 16 scalps so far, to pick up early wickets for CSK and stifle the rival batting line-up.

Going by the head-to-head record this year, MI holds the upperhand having won both their encounters against CSK in the preliminary phase. MI head coach Mahela Jayawardene would be aware of the job at hand and won't take CSK lightly despite the Lions' recent wobbly form.

MS Dhoni IPL 2019 Cricket Mumbai Indians vs Chennai Super Kings, Qualifier 1
Get the latest Cricket news, check out the India cricket schedule, Cricket live score . Like us on Facebook or follow us on Twitter for more sports updates. You can also download the NDTV Cricket app for Android or iOS.