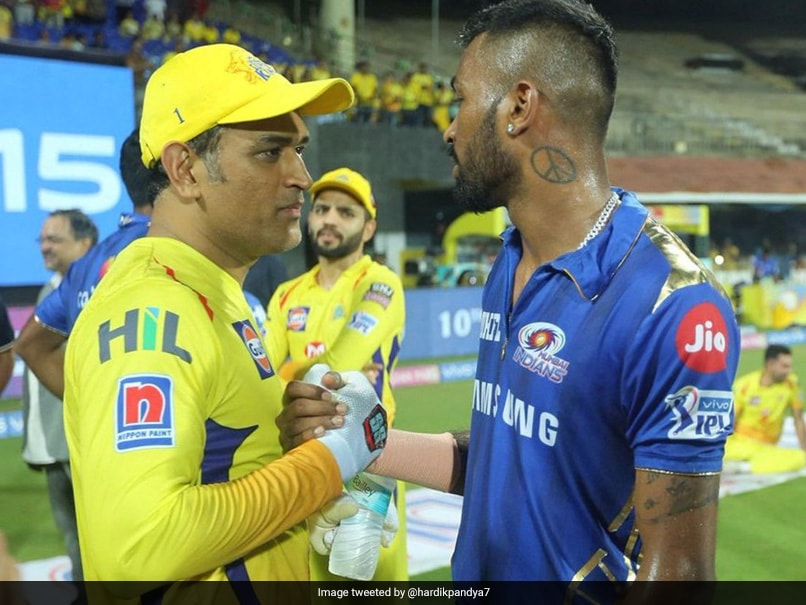 Hardik Pandya has always made it a point to make his affection for MS Dhoni known.© Twitter @hardikpandya7

MS Dhoni is an inspiration for almost every cricket fan in India. Moreover, the younger crop of Indian cricketers also looks up to MS Dhoni, a legend of the game, and try to emulate his feats as much as possible. Although every youngster is awestruck by MS Dhoni's aura, Hardik Pandya has always made it a point to make his affection for the former India skipper known. So, when Chennai Super Kings (CSK) played the Indian Premier League (IPL) Qualifier 1 against Mumbai Indians on Tuesday, Hardik Pandya took to Twitter and posted a picture with MS Dhoni. "My inspiration, my friend, my brother, my legend @msdhoni," Hardik Pandya wrote.

My inspiration, my friend, my brother, my legend @msdhoni pic.twitter.com/yBu0HEiPJw

During the group stage of IPL 2019, Hardik Pandya pulled off MS Dhoni's trademark 'helicopter' shot right in front of the man who popularised it and was quite happy about it.

As far as the match is concerned, an unbeaten half-century from Suryakumar Yadav and disciplined bowling helped Mumbai Indians see off Chennai Super Kings by six wickets to reach their fifth IPL final.

Mumbai Indians restricted holders Chennai Super Kings to 131/4 and then chased down the target with nine balls to spare.

"These are the best batsmen we have got, it looks like we are batting well, but at times they pull off shots that shouldn't be played.

"Hopefully, we will do well in the next game."

Three-time champions CSK still have a chance to qualify for the final when they play the winner of the eliminator between Delhi Capitals and SunRisers Hyderabad in the second qualifier on Friday.

MS Dhoni Hardik Pandya IPL 2019 Cricket Mumbai Indians vs Chennai Super Kings, Qualifier 1
Get the latest updates on ICC T20 Worldcup 2022 and CWG 2022 check out the Schedule, Live Score and Medals Tally. Like us on Facebook or follow us on Twitter for more sports updates. You can also download the NDTV Cricket app for Android or iOS.