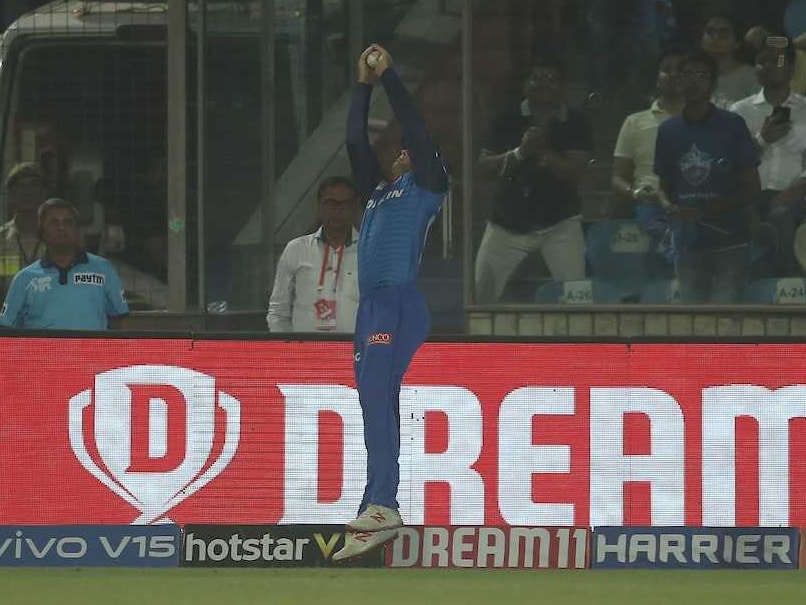 Colin Ingram's relay effort will surely be a candidate for the 'catch of the tournament'.© BCCI/IPL

IPL 2019 has seen witnessed some inspirational moments in the field. From Kieron Pollard's one-handed stunner in the deep to Ben Stokes' superman catch; there have been some exceptional catches this season. But they could all be trumped by a never-seen-before effort from Delhi Capitals' South African import Colin Ingram. The 33-year-old pulled off an extraordinary relay catch with teammate Axar Patel to bring to an end Kings XI Punjab star Chris Gayle's blistering knock in the DC vs KXIP IPL 2019 match at the Feroz Shah Kotla on Saturday night.

Fielding at deep mid-wicket, Colin Ingram leapt to take the catch but with the momentum taking him over the rope, the South African had the presence of mind to throw the ball with to Axar Patel.

What made the effort a candidate for the 'catch of the tournament' was the fact was Ingram was almost in mid-air when he threw the ball with force all the way to Axar Patel, who was standing near long-on.

Fantastic innings from @SDhawan25 and great composure from Shreyas gives a well deserved win.
The catch by Colin Ingram ( eventually by Axar) to dismiss Chris Gayle made a huge difference , Great presence of mind #DCvKXIP https://t.co/xzaTK1Qz8w

Fans couldn't believe what they had seen and took to Twitter to weigh in what would surely go down as one of the best catches in IPL history.

DC needed a magical moment to overcome the Gayle Storm and that is exactly what Colin Ingram gave! Excellent catch. . Smart thinking to throw the ball to Axar. #DCvKXIP

What a brilliant catch by Colin Ingram. Mind blowing fitness, presence of mind and stability!#DCvKXIP #IPL2019

If Names are shared with Run-outs then why not with some catches as Colin Ingram made his best effort but Axar Patel is getting his name for best catch.! There has to be something for it.! Can't they share their name.!@cricketaakash @VVSLaxman281 #VIVOIPL #VIVOIPL2019 #IPL

Chris Gayle's 37-ball blitz guided Punjab to 163 for seven but the score was not enough as Delhi Capitals overhauled the target in 19.4 overs to win by five wickets.

Delhi Capitals skipper Shreyas Iyer anchored the chase with an unbeaten 58 that included a 92-run second-wicket partnership with opener Shikhar Dhawan, who made a quick-fire 56.

The win took Delhi Capitals to 12 points, same as second-placed Mumbai Indians, who are higher thanks to their net run-rate. This was Delhi Capitals' sixth win in 10 matches and puts them in a strong position to claim one of the four playoff spots.

Chris Gayle IPL 2019 Delhi Capitals vs Kings XI Punjab, Match 37 Cricket
Get the latest updates on Fifa Worldcup 2022 and check out  Fifa World Cup Schedule, Stats and Live Cricket Score. Like us on Facebook or follow us on Twitter for more sports updates. You can also download the NDTV Cricket app for Android or iOS.