Chasing 164 for a win, senior opener Shikhar Dhawan laid the foundation with a fluent 56 of 41 balls. 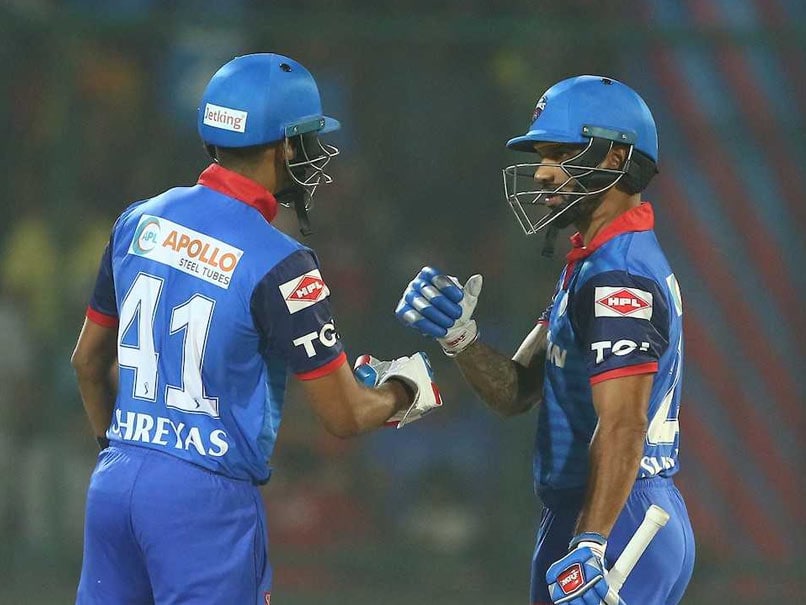 Delhi Capitals avenged their shocking first-leg defeat with a five-wicket victory over Kings XI Punjab, brightening their prospects of making the play-offs of the Indian Premier League in New Delhi on Saturday. Chasing 164 for a win, senior opener Shikhar Dhawan laid the foundation with a fluent 56 of 41 balls, while skipper Shreyas Iyer contributed an unbeaten 58 off 49 balls to complete the job with two balls to spare. Iyer hit five fours and a six.

In the first leg in Mohali, DC lost seven wickets for eight runs to gift KXIP victory after sitting pretty at 144 for three in the 17th over while chasing 168.

Colin Ingram found the fence twice in the next over to ease the nerves and pushed DC closer to the target.

Dhawan struck seven fours and a six before Ravichandran Ashwin ran from mid-on to the midwicket region to compete a fine catch while avoiding a collision with an onrushing Chris Gayle.

During his stay in the middle, Dhawan had some fun by dancing around the crease as Ashwin threatened to Mankad him.

This was DC's second win at home in five outings and sixth overall, occupying the third place in the standings. KXIP remained on fourth with 10 points.

Gayle top-scored with 69 off 37 balls, reaching the half century in 25 balls and hitting six boundaries besides the towering sixes.

Coming back into the team, young leg-spinner Sandeep Lamichhane returned figures of 3/40, playing an influential role in helping DC rally after Gayle's blitzkrieg.

Considering the dew factor in mind, Delhi Capitals skipper Shreyas Iyer invited the visitors to bat first. And the home side, seeking to end their run of woes at the Feroz Shah Kotla, enjoyed early success when Lamichhane tossed the ball up and had Lokesh Rahul stumped with one that turned sharply in the second over.

Ignored for the World Cup primarily because he is considered inferior to Dinesh Karthik behind the stumps, Rishabh Pant did a fine job whipping the bails off in a flash, as Rahul walked back after welcoming Lamichhane with a six down the ground and a four.

Apart from managing two runs from the nine deliveries he faced, Mayank Agarwal watched the action unfold from the other end, as Gayle flayed the Delhi spinners.

The 'Universe Boss', entering the game with 421 runs from nine matches, started his onslaught by smashing Ishant Sharma's knuckle ball over long on for one of the biggest sixes the stadium has ever witnessed, the 101m maximum threatening to break the windows of The Willingdon Pavilion.

He toyed with Amit Sharma and smoked the experienced leg-spinner for three maximums, including two over the deep mid wicket region. Before that the big-hitting Jamaican, one of the biggest globetrotters in T20 leagues, cut, drove and swept Lamichhane for four boundaries in a single over.

It took a brilliant effort from Colin Ingram in the deep to bring to an end Gayle's stay in the middle. After sweeping a Lamichhane delivery into the crowd, Gayle went for one too many, and Ingram, taking the ball over his head, lobbed the ball to Axar Patel before falling on the other side of the rope.

Returning to the playing XI, Lamichhane dismissed Sam Curran in the same 13th over in which he had Gayle, to peg the visitors back. Pacer Kagiso Rabada had 2/23 in four overs, while Axar Patel took 2/22 in three overs.

The Delhi openers started in right earnest but the young Prithvi Shaw, after showing promise, was run out after Dhawan changed his mind to leave his partner stranded at the non-striker's end.

As if to make amends, Dhawan scored two boundaries off Hardus Viljoen in the next two deliveries to take DC to 35 for one at the end of the fourth over.

Debutant left-arm spinner Harpreet Brar was welcomed with a six over long-on by Dhawan, and then, Shreyas Iyer fetched two fours by employing the cut shot as the over yielded 17 runs.

Captain Ravichandran Ashwin introduced himself into the attack and Dhawan was on the ball straightaway, pulling him for a boundary over mid wicket.

Kings XI Punjab IPL 2019 Delhi Capitals vs Kings XI Punjab, Match 37 Cricket
Get the latest updates on IPL 2021, check out the IPL 2021 Schedule and Indian Premier League Live Score . Like us on Facebook or follow us on Twitter for more sports updates. You can also download the NDTV Cricket app for Android or iOS.