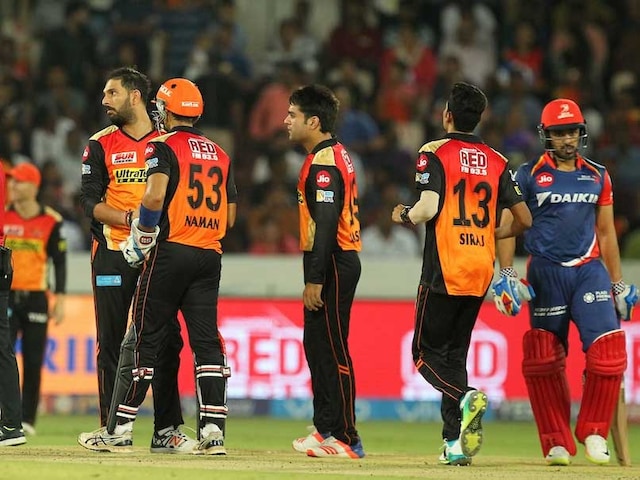 IPL 2017: Sunrisers Hyderabad celebrate the fall of a wicket.© BCCI

Sunrisers Hyderabad rode on Kane Williamson's attacking knock of 89 and some brilliant bowling at the death as they beat Delhi Daredevils by 15 runs in an IPL match in Hyderabad on Wednesday. Electing to bat, Hyderabad posted a challenging 191 for 4 courtesy Williamson's 89 off just 51 balls and his 136-run stand for the second wicket with opener Shikhar Dhawan (70), and then restricted Delhi to 176 for 5 to maintain their unbeaten run at home.

With their fourth successive win at home, Hyderabad jumped to second spot with eight points from six matches, from four wins and two losses.

Chasing 192 for a win, Delhi were in the hunt as they reached 56 for 1 at the end of six powerplay overs with Sanju Samson (42) and Karun Nair (33) going great guns though they lost Sam Billings (13) early on.

But once Samson and Nair were out, Delhi innings lost way and the asking rate piled up. They needed 65 from the final five overs but could only score 49 with the Hyderabad side bowlers coming up with a fine bowling show at the death overs.

Needing 24 runs from the final over, Delhi made a valiant attempt but ended up 15 runs short in the end.

For Hyderabad, Mohammed Siraj took two wickets for 39 runs while Siddarth Kaul and Yuvraj Singh grabbed a wicket each.

Comments
Topics mentioned in this article
Sunrisers Hyderabad Delhi Daredevils Kane Williamson Shikhar Dhawan David Warner Zaheer Khan Rajiv Gandhi International Stadium, Hyderabad IPL 2017 Cricket
Get the latest updates on IPL 2020, check out the IPL Schedule for 2020 and Indian Premier League (IPL) Cricket live score . Like us on Facebook or follow us on Twitter for more sports updates. You can also download the NDTV Cricket app for Android or iOS.