IPL 2017: I'm Used To It And Believe In Myself, Says Bhuvneshwar Kumar

Bhuvneshwar Kumar returned with figures of 5 for 19 that helped his side notch up a five-run win against Kings XI Punjab. 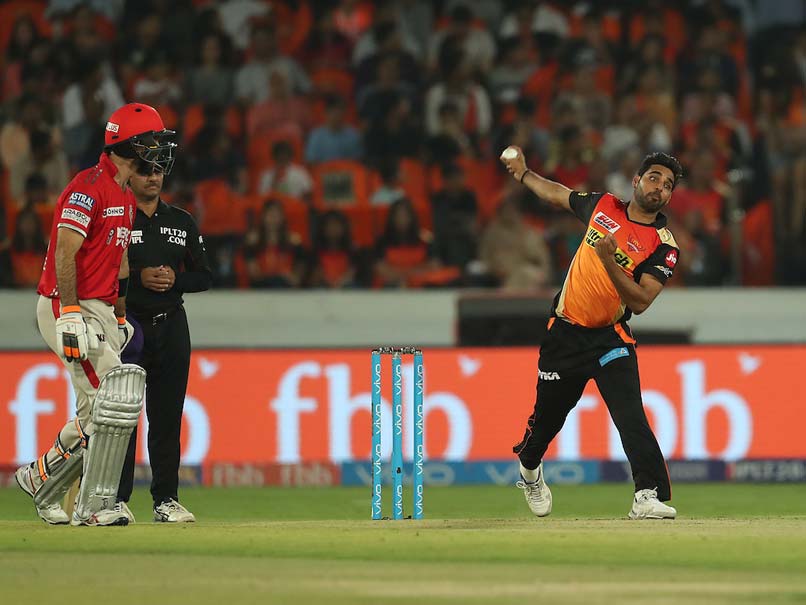 Sunrisers Hyderabad pacer Bhuvneshwar Kumar returned with figures of 5 for 19that helped his side notch up a five-run win against Kings XI Punjab despite a brilliant effort with the bat in hand by Manan Vohra who ended up scoring 95 off just 50 balls. Bhuvneshwar said he was not worried about the onslaught launched by Manan Vohra as he is "used to it".

"My heart is still pounding. T20 is a game where you must expect the unexpected. I've been doing this job for Sunrisers and I knew I had to bowl the 19th over. I'm used to it and I believed in myself," Man of the Match Bhuvneshwar said at the post-match presentation ceremony.

He added, "When I bowled the 16th or 17th over, I knew he was in good nick. I wasn't worried but wanted to make a plan instead. Warner and I planned to bowl straight yorkers and it worked."

Sunrisers skipper David Warner sounded relieved to have a bowler like Bhuvneshwar in his attack.

Warner said, "Credit to Manan for playing like that. Credit to Bhuvi too, he was unbelievable. Manan made it look easy when he cleared the ropes. He had to dig in for his team.

Unfortunately, only one team can win. It's great to have Bhuvi in the shed at the back end and he executed perfectly."

Maxwell said it was "criminal" to have lost the match after Vohra's knock.

"It was an outstanding game, made by a great innings by Vohra. Unfortunately, he didn't have help from the rest of us. It was definitely chase-able. We did well in the middle with the ball but let it slip in the back end.

"To play an innings like that in a losing cause is criminal. He's a superstar. A big score like that was around the corner for him," Maxwell said.

Regarding Bhuvneshwar's exploits, Maxwell said, "We knew Bhuvi was going to swing it around a bit. We didn't expect the wicket to be so up and down and he bowled good lengths.

"We had planned for him and Rashid, but giving seven wickets to them probably did us in. We wanted to take off and get 60 in the powerplay, but it didn't come off."

Comments
Topics mentioned in this article
Sunrisers Hyderabad Kings XI Punjab Bhuvneshwar Kumar Manan Vohra IPL 2017 Cricket
Get the latest updates on IND vs NZ 2021, check out the Schedule and Live Score . Like us on Facebook or follow us on Twitter for more sports updates. You can also download the NDTV Cricket app for Android or iOS.