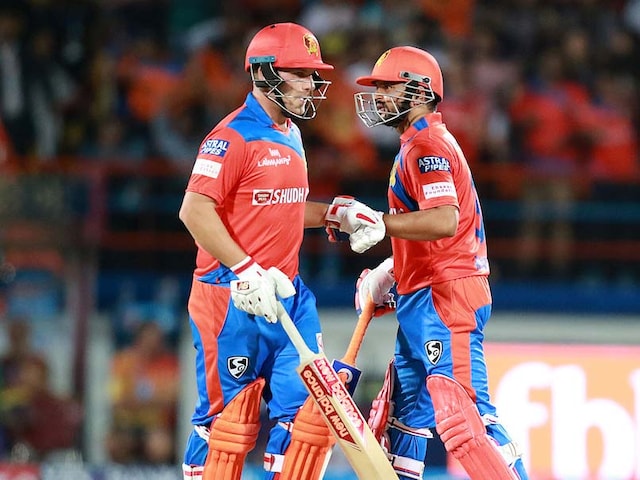 Debutant Andrew Tye registered the second hat-trick of the day as a clinical Gujarat Lions defeated Rising Pune Supergiant by seven wickets to notch up their first win in the ongoing Indian Premier League, in Rajkot on Friday. Opting to bowl first, right-arm pacer Tye, playing his first IPL match, returned with impressive figures of 5 for 17 from his four overs to enable Gujarat Lions restrict Supergiant to 171 for eight. Tye's was the second hat-trick of the day in the history of IPL after Royal Challengers Bangalore's Samuel Badree (4/9) achieved the feat earlier against Mumbai Indians in a losing cause.

Tye was instrumental in keeping the Supergiant's total under check, especially after a blazing start by opener Rahul Tripathi (33 off 17) and skipper Steven Smith (43 off 28).

Later chasing the target, Brendon McCullum (49 off 32) and Dwayne Smith (47 off 30) got Gujarat Lions off to a flier with a blazing 94-run opening stand to set the base for the convincing victory.

Skipper Suresh Raina (35 not out) and Aaron Finch (33 not out) then joined hands and stitched an unbeaten 61-run fourth wicket stand to overwhelm the target with two overs to spare.

Finch finished off the proceedings in great style, clobbering Lockie Ferguson for two huge hits over the fence to get Gujarat Lions' campaign back on track after defeats in the opening two matches.

Chasing the challenging total, Gujarat Lions got off to a blazing start with McCullum and Dwayne Smith sharing qucikfire 94 runs for the opening stand in just 53 balls.

Both McCullum and Dwayne Smith looked in murderous mood as they mostly dealt fours and sixes.

The duo didn't spare a single Supergiant bowler as they effortlessly struck boundaries and sixes.

Supergiant finally manged to put some brakes on the Gujarat Lions' scoring rate when Shardul Thakur dismissed Dwayne Smith in the ninth over, caught at third man by Rahul Chahar.

Dwayne Smith scored his runs off 30 balls with the help of eight boundaries and one six.

The fall of Dwayne Smith's wicket resulted in another two overs later when a charging McCullum was stumped by Mahendra Singh Dhoni off leg-spinner Chahar's bowling.

New man in Dinesh Karthik too didn't last long as he chopped on Imran Tahir's googly on to his stumps in the next over.

Earlier electing to bowl, Gujarat Lions got off to a prefect start as veteran Praveen Kumar (1/51) removed dangerous Ajinkya Rahane for a duck with the third ball of the innings.

The credit for the dismissal should go to Gujarat Lions skipper Raina who pulled off a one-handed blinder at the first slip from a good length delivery that came in after pitching and cramped the batsman for room only to induce an outside edge.

But Tye put the brakes on the scoring with a slower delivery by removing the dangerous-looking Tripathi in his first over as the batsman went for another huge hit only to lift the ball as far as mid-off into the safe hands of Finch.

Smith was the next to depart when he mistimed a Dwayne Smith delivery to Finch at long-on with the Supergiant scoreboard reading 89 for two in 9.2 overs.

Tye once again came to the party when he went through the defence of Ben Stokes in the 13th over.

Well done @TheGujaratLions Can't wait to get back on the field with my team. Almost time to roar! #RoadToRecovery

Under-fire Dhoni's (5) woeful run in the tournament continues as he lasted a just eight deliveries, caught in plumb in front of the wicket by Ravindra Jadeja (1/40).

But Tye left his best for the last over of the innings and dismissed Ankit, Tiwary and Shardul Thakur with the first three balls to halt Supergiant's surge.

Tye was at his effective as he deceived the batsmen, who went for big shots, with best with his slower balls that includes his famous knuckle delivery.

Tye was unlucky not to get his sixth wicket of the day in the form of Rahul Chahar as Jadeja dropped a simple chance in the final delivery of the innings.

Comments
Topics mentioned in this article
Gujarat Lions Rising Pune Supergiant Andrew Tye Saurashtra Cricket Association Stadium, Rajkot IPL 2017 Cricket
Get the latest Cricket news, check out the India cricket schedule, Cricket live score . Like us on Facebook or follow us on Twitter for more sports updates. You can also download the NDTV Cricket app for Android or iOS.