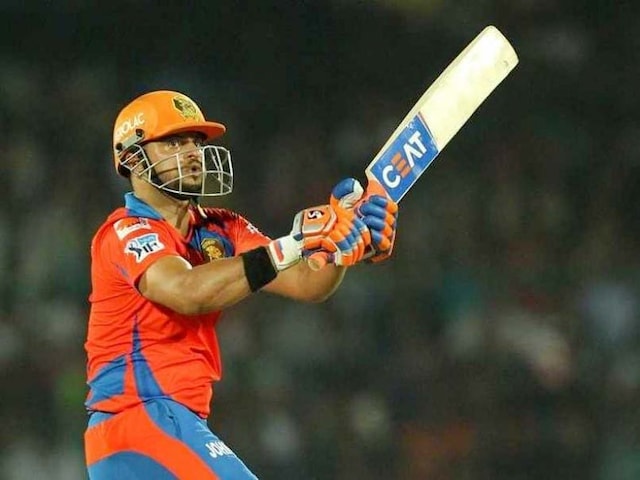 Registering their first win of the season, Gujarat Lions (GL) beat Rising Pune Supergiant (RPS) by seven wickets with two overs to spare in the Indian Premier Legaue (IPL). Giving a blistering start to their team, Brendon McCullum and Dwayne Smith scored 49 and 47 respectively to give the hosts a platform at the start. GL chased down the challenging total of 171/8 posted by RPS at the Saurashtra Cricket Association Stadium at Rajkot on Friday night. Earlier in the evening, IPL debutant Andrew Tye scalped 5 wickets, which included a hat-trick, in the last over of the RPS innings. Smith had emerged as the highest run-getter for the visitors with 45, followed by Ankit Tripathi (33) and Manoj Tiwary (31.) Ben Stokes and MS Dhoni failed to impress with the bat yet again. (Scorecard)

23:25 IST: Hope you enjoyed our coverage. Catch us tomorrow again.

23:22 IST: And Gujarat Lions have won their first match of the season. On the other hand, RPS have succumbed to their 3rd consecutive loss.

23:03 IST: Four! Getting to the pitch of the ball, Raina blasts Tahir for a boundary.

22:50 IST: Out! Tahir runs around the field as Karthik plays himself down.

22:46 IST: Imran Tahir comes back after an expensive first spell.

22:45 IST: Dinesh Karthik joins skipper Raina out in the middle.

22:42 IST: McCullum dances down the wicket, misses and Dhoni takes off the bails.

22:42 IST: Breakthrough for RPS! Chahar sends McCullum (49) back to pavilion.

22:39 IST: Brilliant paddle scoop from Brendon McCullum but Chahar keeps the ball in by jumping over the boundary rope!

22:37 IST: Brilliant over by Ferguson as he concedes only 2 runs!

22:32 IST: GL skipper Suresh Raina comes out in the middle.

22:30 IST: Out! Shardul Thakur sends Smith packing. Smith misses out on a half-century.

22:25 IST: Six! Tahir being taken to the cleaners by McCullum.

22:24 IST: McCullum and Smith are dealing in boundaries right now.

22:23 IST: Four! Tahir is being smoked by both McCullum and Smith.

21:58 IST: It seems the Gujarat Lions are in mood to punish the RPS bowlers.

21:38 IST: Four! Smith slams the first ball for a boundary on the leg side.

21:37 IST: Dwayne Smith and Brendon McCullum start the proceeding for GL while Ankit Sharma opens the bowling attack for RPS.

21:36 IST: Hello and welcome back to second innings between Rising Pune Supergiant and Gujarat Lions.

21:35 IST: Jadeja drops a sitter. Tye misses out on his sixth wicket.

21:34 IST: Tye is setting the temperature soaring at Rajkot.

21:33 IST: What a last over it is turning out to be for Gujarat Lions!

21:31 IST: Out! McCullum holds onto a skier just on the boundary rope. Tye gets his third.

21:26 IST: With just two overs left, RPS will be looking to blast the bowlers.

21:25 IST: Praveen Kumar start his fresh spell with a wide down the leg side.

21:22 IST: With just 6 runs from the 18th over Andrew Tye restricts the RPS batsmen.

21:16 IST: Caught and bowl chance for Jadeja as Tiwary fires right into him.

21:07 IST: WICKET!! Jadeja gets the big wicket of Dhoni. Pune are in big trouble now.

21:04 IST: Last 10 balls have yielded just 10 runs for Pune. They need to get a move on with just about four overs left.

20:56 IST: Bowled! Andrew Tye gets a slower ball right and the stumps are all over the place. Ben Stokes departs for 25(18).

20:53 IST: Four! Stokes gets the ball away over short backward square leg.

20:47 IST: Manoj Tiwary is the new man in. With the run rate hovering around 10 per over, it is on Tiwary and Stokes to put up a big total on board.

20:40 IST: Six! Ben Stokes slams Jadeja over the rope for a big maximum.

20:29 IST: Ben Stokes comes out in the middle to join skipper Smith.

20:24 IST: Andrew Tye gets introduced into the bowling attack.

20:20 IST: Six! Short by Praveen, Tripathi dances down the wicket and clears the boundary with ease.

20:17 IST: Four! Short by Jakati and Smith smashes it through mid wicket.

20:11 IST: Four!! Wide from Praveen and Tripathi smashes it to the square boundary.

20:02 IST: WICKET!! What a catch from Suresh Raina at first slip. Absolutely breathtaking!! Rahane walks back for zero. Huge setback for Pune.

19:55 IST: Rahul Tripathi and Ajinkya Rahane walk out to bat. Praveen Kumar has the ball in hand.

19:25 IST: Hello and welcome to the live blog of the day's second game. Gujarat take on Pune in Rajkot.

GL, who finished an impressive third in their maiden IPL appearance last year, would be desperate to turn their fortunes around in front of home fans.

Jadeja has had a terrific home season with both ball and bat for India and his return will definitely boost GL morale.