Australian fast bowler Andrew Tye picked up the second hat-trick and the first 5-for of IPL 2017. 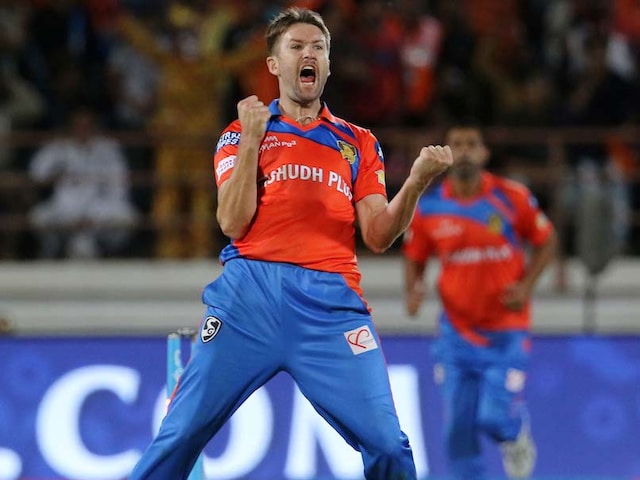 Australian Andrew Tye was on a roll on Friday evening as the fast bowler picked up the second hat-trick and the first five-wicket haul of the 10th edition of the Indina Premier League (IPL). Playing for Gujarat Lions at home in Rajkot, the Australian picked up what was a second hat-trick in a day after Royal Challengers Bangalore's (RCB) Samuel Badree also clinched three wickets in three deliveries against the Mumbai Indians in Bengaluru.

Tye dismissed Ankit Tiwari for 25 when he was caught on the first ball of the 20th over of Rising Pune Supergiant's innings. Next, Tye dismissed Manoj Tiwary for 31 and then clean bowled Shardul Thakur for a golden duck for his hat-trick.

This is the first instance of two hat-tricks on the same day in IPL, with both playing their first game's of the season.

Rising Pune Supergiant were looking to score 190 until Tye reined them in with the first five-wicket haul of 2017 IPL. His other two wickets were England's Ben Stokes (25) and opener Rahul Tripathi (33).

This is also Tye's first-wicket haul in Twenty20 cricket

Tye's figures of 5/17 in his four overs are the best by an IPL debutant.

Comments
Topics mentioned in this article
Gujarat Lions Rising Pune Supergiant Saurashtra Cricket Association Stadium, Rajkot IPL 2017 Cricket Andrew Tye
Get the latest Cricket news, check out the India cricket schedule, Cricket live score . Like us on Facebook or follow us on Twitter for more sports updates. You can also download the NDTV Cricket app for Android or iOS.