Shane Watson received the highest bid in the Indian Premier League 2016 auction, after the Australian all-rounder was snapped up by Royal Challengers Bangalore for Rs 9.5 crore. However, uncapped youngster Pawan Negi sprung the biggest surprise by becoming the costliest Indian at Rs 8.5 crore.

Written by Santosh Rao
Read Time : 5-min
Shane Watson's magnificent performances for Rajasthan Royals in the Indian Premier League made him one of the most wanted players in the IPL auction 2016. © BCCI

Shane Watson was bought for a whopping Rs 9.5 crore by Royal Challengers Bangalore while Yuvraj Singh went to the Sunrisers Hyderabad for Rs 7 crore. But the biggest surprise of the day came when Delhi Daredevils dished out a huge sum of Rs 8.5 crore for the services of uncapped all-rounder Pawan Negi. (IPL Auction 2016Â Highlights)

Negi, who has been included in India's World Twenty20 squad, is well known for his power hitting down the order and canny left-arm orthodox spin bowling and had a base price of Rs 30 lakh.

Delhi Daredevils and Pune Supergiants went head to head for the all-rounder and it seemed the bidding would never end. But in the end Stephen Fleming, coach of the Pune franchise, finally gave up, allowing Delhi to bag Negi, who became the highest Indian buy in this year's auction.

Australian all-rounder Watson, who had a base price of Rs 2 crore, was sold to Royal Challengers Bangalore for a whopping Rs 9.5 crore. RCB and Pune started the bidding for him with Mumbai Indians jumping in the mix. However, the Virat Kohli-led team managed to hold off others and win the bid.

Yuvraj, who was the most expensive player in last year's auction, was snapped up by surprise package of the auction so far - Sunrisers Hyderabad - for Rs 7 crore.

Another huge surprise of the auction was South Africa's Chris Morris. The bowling all-rounder, who had a base price of Rs 50 lakh, sparked a bidding war between Mumbai Indians and Kolkata Knight Riders but in the end Delhi Daredevils swooped in with a bid Rs 7 crore to take home the player.

Another player, who went for big money was Indian pacer Mohit Sharma. The former Chennai Super Kings player had a base price of Rs 1.5 crore and was finally bought for a whopping Rs 6.5 crore by Kings XI Punjab.

Pietersen, who has done well in the recently concluded Big Bash League, was snapped up by the Pune Supergiants for Rs 3.5 crore.

Indian pacer Ishant Sharma was another player the Pune franchise had eyes on and they got their man for Rs 3.8 crore.

There were a few surprises in store for some big names, though. Australia's T20 captain and arguably one of the most prolific run-getters in the shortest format of the game, Aaron Finch, went unsold in the first round of bidding but in the accelerated auction, he was bought by Gujarat Lions for his base price of Rs 1 crore.

However, New Zealand star Martin Guptill didn't have the same luck as he went unsold even after having a base price of Rs 50 lakh. George Bailey and Usman Khawaja had to bear the same fate as there were no takers for the Australian duo.

Retired players like Mahela Jayawardene, Mike Hussey and Brad Haddin all received the cold shoulder from the franchises.

Dinesh Karthik became Gujarat Lions third buy of the day as the wicketkeeper was snapped up for Rs 2.3 crore.

Mumbai Indians and Kolkata Knight Riders went head to head for the services of England wicketkeeper batsman Jos Buttler with the former finally getting their player for a bid of Rs 3.8 crore. 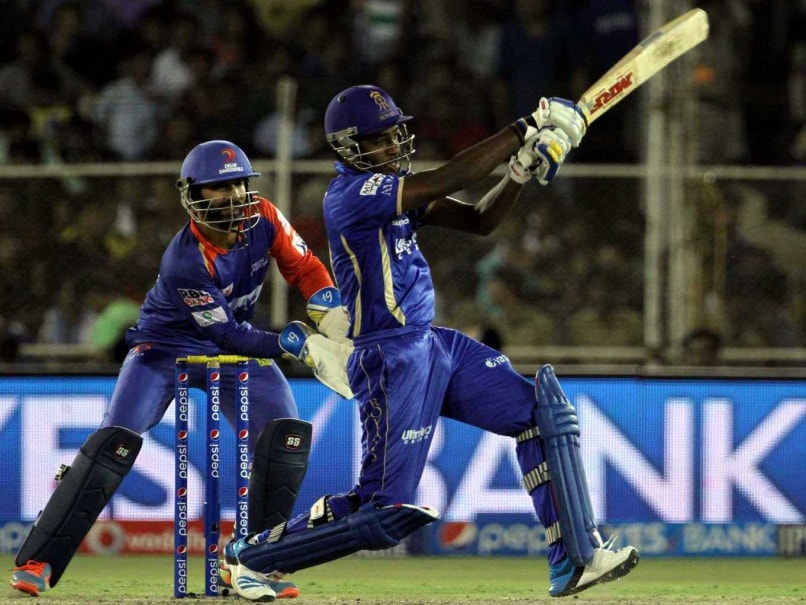 Sanju Samson, who played for Rajasthan Royals last year, was bought for a whopping Rs 4.2 crore by Delhi Daredevils in the 2016 IPL auction.

Youngsters the Flavour of the Auction

Sanju Samson, though, had no such problem as Delhi Daredevils shelled out Rs 4.2 crore for the young batsman. The youngster, who played for Rajasthan Royals last year, was priced at Rs 2 crore and Gujarat Lions seemed interested in a while but backed out after Delhi's aggressive bidding.

Delhi Daredevils and Kolkata Knight Riders made shock bids for Carlos Brathwaite that resulted in the Caribbean player, who had a base price of Rs 30 lakh, being sold for Rs 4.2 crore to the Delhi franchise.

Bangladesh pacer Mustafizur Rahman, who had a base price of Rs 50 lakh, also joined the 'crore club' as Sunrisers Hyderabad won his services for Rs 1.4 crore.

However, the big surprises came in the list of uncapped players that sent the franchises into a tizzy.

Karun Nair was the trend-setter! The Karnataka batsman came in with a base price of Rs 10 lakh but with Delhi Daredevils in a mood to splash the cash, he was finally bought by them for 40 times his base price - Rs 4 crore.

The trend caught on quick as Delhi were at it again! This time Rishabh Pant the beneficiary. The youngster, who smashed the fastest fifty in U-19 cricket, was picked up by the Daredevils for Rs 1.9 crore after having a base price of Rs 10 lakh.

Taking cue from Delhi, Gujarat Lions sparked a bidding war with Kolkata Knight Riders for big-hitting youngster Deepak Hooda, who had a base price of Rs 10 lakh. Both teams were locked in intense bidding but once again the Hyderabad franchise swooped in to buy the player for 45 times his base price - Rs 4.5 crore.

Nathu Singh, little-known Rajasthan pacer, carried on the trend with Delhi Daredevils once again in the thick of the action. This time it was the turn of Mumbai Indians to jump into the fray and the player, who had a base price of Rs 10 lakh, was finally sold to the Mumbai outfit for Rs 3.3 crore.

Another shock was the bidding for Murugan Ashwin. Pune Supergiants, not one to be left out, bought the Rs 10 lakh base price player for a whopping Rs 4.5 crore.

Comments
Topics mentioned in this article IPL 9 Yuvraj Singh Shane Watson Ishant Sharma Cricket Pawan Negi
Get the latest Indian Premier League 2020 news, check out the IPL 2020 schedule, Cricket live score . Like us on Facebook or follow us on Twitter for more IPL 2020 updates. You can also download the NDTV Cricket app for Android or iOS.
Related Articles