Rishabh Pant scored a solid 71 in the first One-day International against the West Indies and thanked the Chennai crowd for their support. 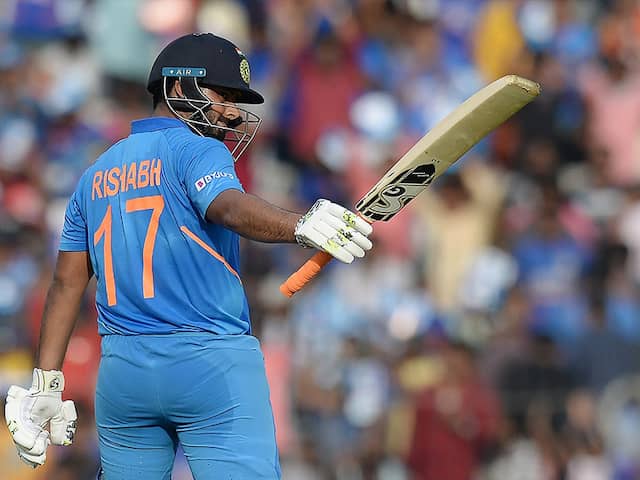 The chants of Rishabh Pant filled the stadium following an impressive show in Chennai.© AFP

Rishabh Pant has been mocked by fans with chants of 'Dhoni, Dhoni' at various stadiums but he captivated the Chennai crowd with an impressive 71-run knock in the first One-day International against the West Indies on Sunday. However, Rishabh Pant's ODI-best knock didn't result in India's favour and the West Indies registered an eight-wicket win at the MA Chidambaram Stadium to take a 1-0 lead in the three-ODI series. The 22-year-old wicketkeeper-batsman top-scored for India after they lost Virat Kohli and KL Rahul cheaply and chants of Rishabh Pant filled the stadium following an impressive show.

Finally Everyone is shouting Rishabh Pant instead of Dhoni. #KnowledgeableChennaiCrowd pic.twitter.com/mCHLrQzotB

After the match, Pant thanked the Chennai crowd for support and revealed how it felt when he was greeted by MS Dhoni chants at stadiums.

"Sometimes it's important when crowd supports you. From an individual point of view, I was trying to improve myself every day but I wasn't getting there. I am not saying I got there, but I try to improve." Pant said at the post-match press conference.

Pant has been heavily criticised by fans and critics alike for throwing away his wicket at various occasions.

In the three-match T20 International series against the West Indies that India won 2-1, Pant lost his wicket for a duck in the third and final match after having managed to score 33 (not out) and 18 in first two matches.

While critics didn't shy to call Pant's batting reckless, the young wicketkeeper-batsman said he doesn't believe in "anything like a natural game".

"I've realised after playing a fair bit at international level that unlike at amateur levels of cricket, there isn't anything like a natural game. At the international level, you have to play according to the situation or what the team demands," he said.

"It's my learning curve, I'm thinking that. From team's point of view, whatever I can do to help my team win, to have a good score on the scoreboard, that's what I was focussing on. In the end, I got some runs," Pant added.

India will look to stay alive in the series with a victory in the second ODI in Visakhapatnam on Wednesday.

MS Dhoni India vs West Indies 2019/20 Cricket India vs West Indies, 1st ODI
Get the latest Cricket news, check out the India cricket schedule, Cricket live score . Like us on Facebook or follow us on Twitter for more sports updates. You can also download the NDTV Cricket app for Android or iOS.