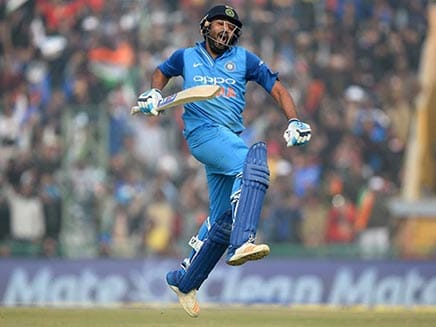 Rohit Sharma is on cloud nine after hitting his third double-century in ODI cricket, which came against Sri Lanka on Wednesday. His third career double powered the hosts to a comprehensive 141-run to level the three-match 1-1. The right handed opening batsman went berserk after completing his century and scored his second hundred off just 36 deliveries. Sri Lanka's lead bowler Suranga Lakmal ,who recorded career-best ODI figures of four for 13 to help his team dismiss the much vaunted Indian batting line-up for a paltry 112, was on the receiving end this time. The Indian batsman went berserk and literally tore the lanky fast bowler into pieces by hitting four sixes on the trot.

First six: Lakmal's yorker completely went wrong and Rohit shuffled towards the off side to make full use of the full-toss. He smashed the ball over long-on.

Second six: Lakmal failed with another attempted yorker and this time he ended up bowling on Rohit's pads. The batsman flicked it over deep square-leg for another maximum.

Third six: Lakmal bowled poor delivery again on the pads and Rohit was quick to give it the same treatment. This time the hit was a bit finer.

Fourth six: Lakmal tried to be a little innovative by bowling a slower delivery. Rohit, who was in full flow, waited for the delivery and heaved it over deep mid-wicket.

With this knock of 208 not out, Sharma has decisively made himself an icon when it comes to batting in limited-overs cricket. His three double-centuries are unlikely to be touched in a hurry, as no other batsman has even two and some of them have retired.

Sharma first crossed the double-ton landmark on November 3, 2013, as he scored 209 against Australia at the M. Chinnaswamy Stadium in Bengaluru.

Sri Lanka then felt the power of his broad blade twice, as he first hammered 264 against them at the Eden Gardens in Kolkata on 14 November, 2014.

Then comes this, his third double-century, also against Sri Lanka, on December 13, which incidentally is also Sharma's second marriage anniversary.