In the 61st over of Sri Lanka's first innings, the left-hander miscued his hit over long on and was caught by Ishant Sharma at mid on. As the Indians picked up the fifth Lankan wicket, there was no fist pump or aggressive gestures from Kohli. Instead, he broke into a little Bhangra gig. 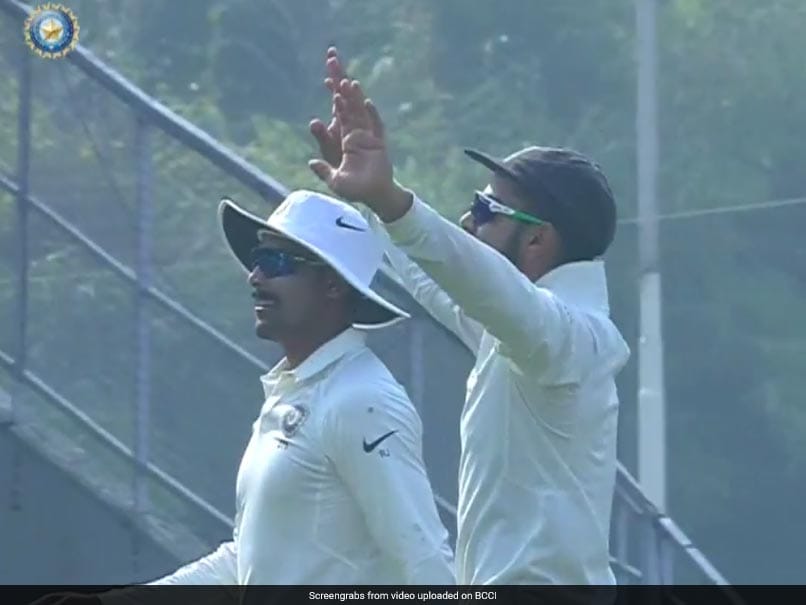 India captain Virat Kohli does not hold back when it comes to celebrating the fall of opposition wickets. Be it the dismissal of a main batsman or a tailender, Kohli enjoys the moment with the same enthusiasm every time. Hence it came as a surprise when the 29-year-old opted for a rather unique celebration when Ravindra Jadeja got the better of Niroshan Dickwella. In the 61st over of Sri Lanka's first innings, the left-hander miscued his hit over long on and was caught by Ishant Sharma at mid on. As Team India picked up the fifth Lankan wicket, there was no fist pump or aggressive gestures from Kohli. Instead, he broke into a little Bhangra gig.

Kohli and Dickwella were involved in a heated incident in the 1st Test. The Indians were pushing for an unlikely win in the final session on Day 5. However, the visitors pulled out all the stops to try and derail India's charge. One such instance occurred when Dickwella took the cue from some footballers and tried the dark art of time-wasting. Kohli and pacer Mohammed Shami, clearly annoyed by his antics, blasted Dickwella. Kohli was visibly furious and was seen angrily gesticulating at the umpires.

Nigel Llong finally got Dickwella and Kohli together, had a chat with the two and calmed things down before the situation could boil over.

Ahead of the second Test, Kohli said he was impressed by Dickwella's batting.

"I like to see that character. I liked that competitiveness on the field. He is someone who takes lot of pride in his cricket. I am impressed with what I have seen so far of him from the last series as well. He has got great ability to do something very special for Sri Lankan cricket," he told reporters.

Comments
Topics mentioned in this article
India Cricket Team Sri Lanka Cricket Team Virat Kohli Niroshan Dickwella Cricket India vs Sri Lanka 2017-18
Get the latest updates on India vs England Series, India vs England , live score and IPL 2021 Auction . Like us on Facebook or follow us on Twitter for more sports updates. You can also download the NDTV Cricket app for Android or iOS.