India vs England: Wasim Jaffer made a '3 Idiots' meme after three Indian batsmen got out in rapid succession in the 4th Test, leaving Washington Sundar stranded at the non-striker's end on 96 not out. 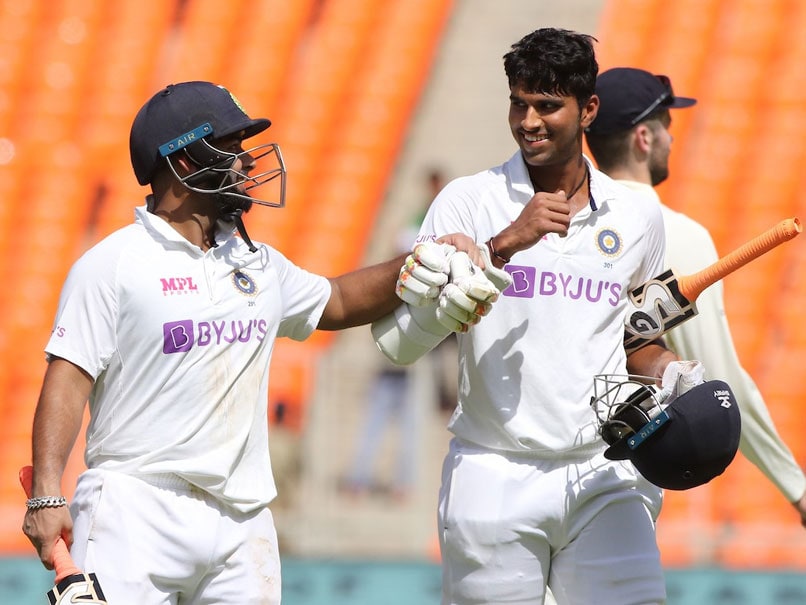 Washington Sundar excelled with the bat in the fourth and final Test against England in Ahmedabad.© BCCI

Washington Sundar was one of the heroes of India's emphatic win over England in the fourth and final Test that helped the hosts win the four-match series 3-1. Sundar, who made a name for himself thanks to his gritty batting in Australia, once again excelled with the bat in hand, scoring a brilliant 96 not out to help India take a decisive first innings lead in Ahmedabad. However, the young left-hander was left stranded four short of a deserved century after the hosts lost their final three wickets on the same score. At the time, former India cricketer Wasim Jaffer had put out a meme from a scene from the movie '3 Idiots', poking fun at the trio of Axar Patel, Ishant Sharma and Mohammed Siraj -- the three players that were dismissed before Sundar could reach his maiden hundred.

Thanks a lot bhaiya! Dad will definitely treat them with a lot of biryani and Halwa!

It all started when Sundar, in his maiden Test innings in Brisbane against Australia, scored a courageous 62 to bail India out of a precarious situation. India went on to win the Gabba Test and clinch the series in Australia.

However, Washington Sundar's father had expressed his disappointment on his son missing out on a hundred.

Sundar's 96 was crucial to India's cause as the hosts won by an innings and 25 runs to book their place in the World Test Championship final against New Zealand in June.

India were in trouble after England reduced them to 146 for six in the first innings. But a rampant Rishabh Pant and Sundar got together to notch a 113-run partnership and put India in the driver's seat.

India were bowled out for 365 with Sundar stranded on 96 as India took a 160-run lead. Ravichandran Ashwin and Axar Patel spun a web around the English batsmen in the second innings, both taking five-wicket hauls, as the visitors were packed off for 135.

Ishant Sharma Wasim Jaffer India vs England 2020-21 Cricket
Get the latest updates on Fifa Worldcup 2022 and check out  Fifa World Cup Schedule, Stats and Live Cricket Score. Like us on Facebook or follow us on Twitter for more sports updates. You can also download the NDTV Cricket app for Android or iOS.