India vs England: Ravichandran Ashwin and Axar Patel picked up five wickets apiece as India crushed England by an innings and 25 runs in fourth Test to win the series 3-1 and qualify for the World Test Championship final. 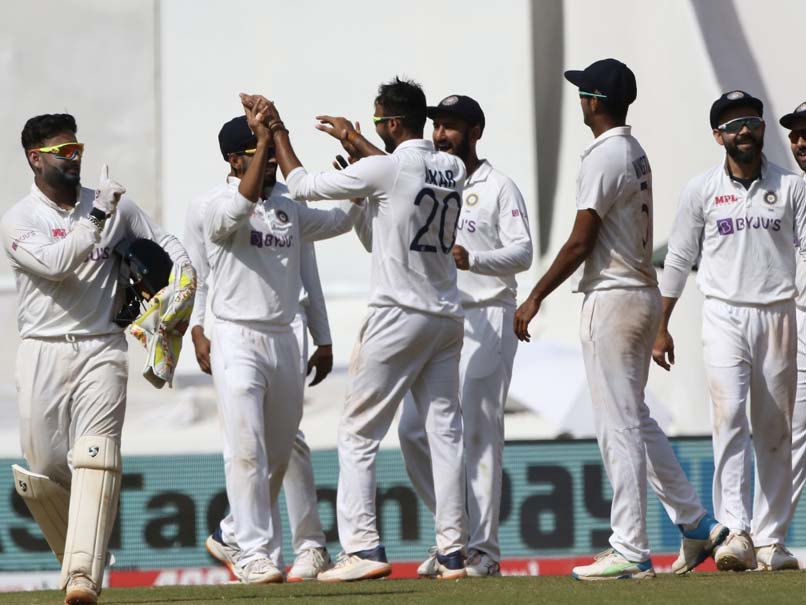 India crushed England by an innings and 25 runs to seal the series 3-1 and qualify for WTC final.© BCCI

India defeated England by an innings and 25 runs in the fourth and final Testto win the four-match series 3-1 and seal a place in the final of the inaugural edition of the World Test Championship on Saturday. Rishabh Pant (101) and Washington Sundar (96 not out) set up the huge win for India after the hosts had bowled the visitors out for 205 in their first innings. Ravichandran Ashwinand Axar Patel picked up five-wicket hauls in the second innings to help India bundle England out for 135.

India started Day 3 at 294 for seven, and Axar Patel along with Sundar continued to score freely in the first hour on Saturday.

The duo put on 106 runs for the eighth wicket before a mix-up in the middle ended Axar's stay. He was run out on 43.

Ben Stokes then cleaned up Ishant Sharma and Mohammed Siraj inside four deliveries to leave Sundar stranded on 96 as England took the last three wickets in five deliveries to bowl India out for 365.

Stokes was the pick of the bowlers for England as he returned with figures of four for 89.

He was ably supported by James Anderson who took three for 44 but their spinners disappointed on a surface that offered some turn and bounce.

In the second essay, the hosts came out to bowl with a healthy lead of 160.

England negotiated the last few minutes before Lunch without losing any wickets but Ravichandran Ashwin picked up two wickets in two balls to rock the visitors in the post-lunch session.

Joe Root was looking good during his short stay in the middle but he misjudged a length delivery from Ashwin and was trapped in front of the stumps.

Both teams will now shift their focus to the shortest format of the game as they will play five Twenty20 Internationals at the same venue, starting March 12.

Ravichandran Ashwin Washington Sundar Cricket India vs England 2020-21 India vs England, 4th Test
Get the latest updates on ICC T20 Worldcup 2022 and CWG 2022 check out the Schedule, Live Score and Medals Tally. Like us on Facebook or follow us on Twitter for more sports updates. You can also download the NDTV Cricket app for Android or iOS.