India vs England: Shreyas Iyer suffered a shoulder injury while fielding in the second innings of the first ODI. He has been taken for scans. 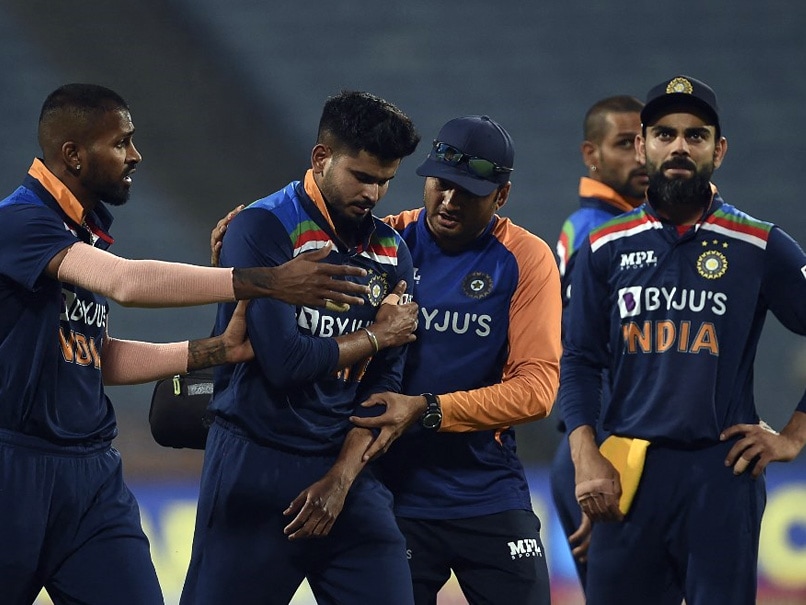 India had two injury scares during the first ODI against England in Pune as Shreyas Iyer and Rohit Sharma suffered injuries on the field. Iyer walked off the ground in the second innings after he "subluxated" his left shoulder while fielding in the eighth over of the innings, said BCCI in a tweet. "He has been taken for further scans and won't take any further part in the game," the tweeted further read. Iyer was seen grimacing in pain after his attempt to filed a ball as he lay on his back on the ground. The physio had to be called on the field and the Indian batsman was helped off the park. Rohit was hit on the right elbow while batting in the first innings, said BCCI, and added: "He won't take the field."

UPDATE - Shreyas Iyer subluxated his left shoulder in the 8th over while fielding. He has been taken for further scans and won't take any further part in the game.

Rohit Sharma was hit on the right elbow while batting and felt some pain later. He won't take the field.#INDvENG pic.twitter.com/s8KINKvCl4

Iyer had an off day with the bat on Tuesday as he manged just 6 runs off 9 balls even as India scored 317 for 5 after being asked to bat England.

Earlier, Shikhar Dhawan (98) narrowly missed out on a hundred and Virat Kohli scored 56 to help India lay a platform for the death.

Rohit was subdued, too, scoring only 28 off 42 balls an opening partnership of 64 runs with Dhawan.

The match also saw Krunal, on ODI debut, make the fastest fifty by a debutant in the 50-over format, off just 26 balls.

He broke down during an interview at innings break after which his older brother and India teammate Hardik Pandya was seen consoling Krunal.

Krunal and Hardik had lost their father Himanshu Pandya in January this year.

Rohit Sharma India vs England, 1st ODI Cricket
Get the latest updates on Fifa Worldcup 2022 and check out  Fifa World Cup Schedule, Stats and Live Cricket Score. Like us on Facebook or follow us on Twitter for more sports updates. You can also download the NDTV Cricket app for Android or iOS.