India vs England: Krunal Pandya Hits Fastest Half-Century By Any Debutant In ODIs

India vs England: Krunal Pandya overcame his emotions and the hostile England bowling to register the fastest-ever half-century by a debutant in ODIs. 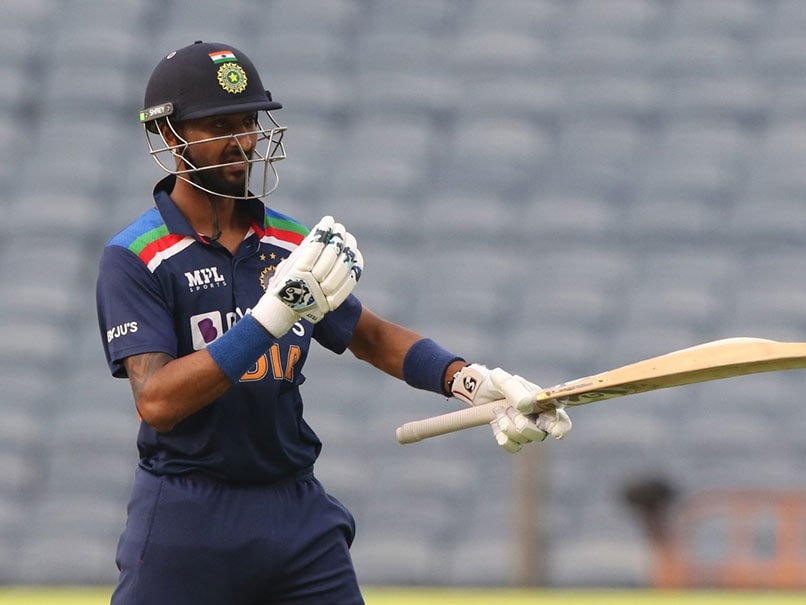 Krunal Pandya hit the fastest half-century by a debutant in ODIs in the first match against England in Pune on Tuesday. Coming in to bat with India at 205/5 in 40.3 overs, the older Pandya brother smashed a half-century off just 26 deliveries. He finished not out with 58 off 31 deliveries, hitting seven boundaries and two sixes. His explosive counter-attack at the end - aided by KL Rahul's unbeaten 43-ball 62 - powered India to 317/5 after being put in to bat, a total that one time seemed difficult to get.

It was an emotional debut for Krunal, who lost his father recently, and he made little effort to hide it, pumping his fist and punching his bat after every boundary.

Krunal Pandya and KL Rahul put on a partnership of 112 off just 57 deliveries to put India's inning back on track, after a 105-run stand between Shikhar Dhawan and Virat Kohli gave the hosts a good start.

Rohit Sharma fell for 28 after India got off to a slow start, but Kohli and Dhawan then steadied the ship for India as they picked up the pace.

Kohli was eventually dismissed for 56, while Shikhar Dhawan came agonisingly close to his century, departing for 98.

Shreyas Iyer and Hardik Pandya both fell cheaply, but Krunal and Rahul took over in the final 10 overs, launching a brutal assault on the England bowlers.

Rahul hit four boundaries and four sixes as he found his mojo again after a poor run of form in the T20 International series against England.

England Cricket Team Krunal Pandya India vs England, 1st ODI Cricket
Get the latest updates on IPL Auction 2023 and check out  IPL 2023 and Live Cricket Score. Like us on Facebook or follow us on Twitter for more sports updates. You can also download the NDTV Cricket app for Android or iOS.