India vs England (IND vs ENG) ODI Series 2021: Debutant Prasidh Krishna took four wickets to help India defeat England in the first ODI, at the MCA Stadium on Tuesday. The hosts have also taken a 1-0 lead in the three-match series. 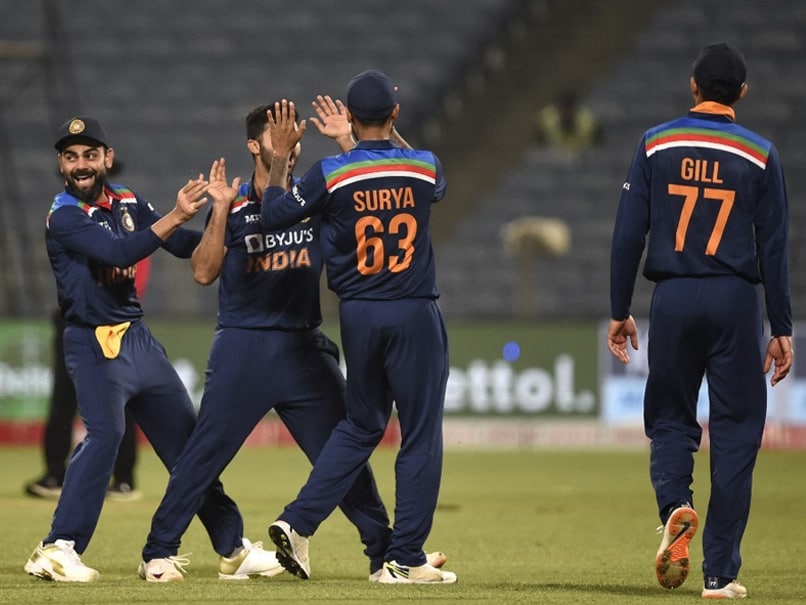 IND vs ENG: India celebrate a wicket against England during the 1st ODI in Pune.© AFP

India defeated England by 66 runs in the first ODI of the three-match series, at the MCA Stadium in Pune on Tuesday. In response to a target of 318 runs, the visitors were bowled out for 251 in 42.1 overs. England had a bright start to their chase, but the departures of openers Jason Roy (46) and Jonny Bairstow (94) saw them lose plenty of momentum. Also, debutant Prasidh Krishan bounced back after a few expensive deliveries, to take four wickets and Shardul Thakur registered three dismissals. Meanwhile, Bhuvneshwar Kumar took two wickets and debutant Krunal Pandya also scalped a dismissal. Earlier, the hosts posted 317 for five in 50 overs, with Shikhar Dhawan missing out on a century by two runs. Captain Virat Kohli also put in a good batting show, slamming 56 runs. KL Rahul (62) and Krunal (58) remained unbeaten till the end, helping their side set a strong target. Krunal also reached his half-century in 26 balls, the highest by a debutant in ODIs. Ben Stokes was the pick of the bowlers for England registering three wickets, while Mark Wood took two dismissals. The hosts have taken a 1-0 lead in the ongoing series, and will be aiming to build on their form in the second ODI. (SCORECARD)

England Cricket Team Live Score Live Cricket Score Live Blogs Cricket
Get the latest updates on IPL 2021, IPL Points Table , IPL Schedule 2021 , live score . Like us on Facebook or follow us on Twitter for more sports updates. You can also download the NDTV Cricket app for Android or iOS.