India vs England: Axar Patel was in top form as the hosts won the second Test match by a huge margin. Although, Virat Kohli's side levelled the series, Kevin Pietersen downplayed the win through a cheeky dig on social media. 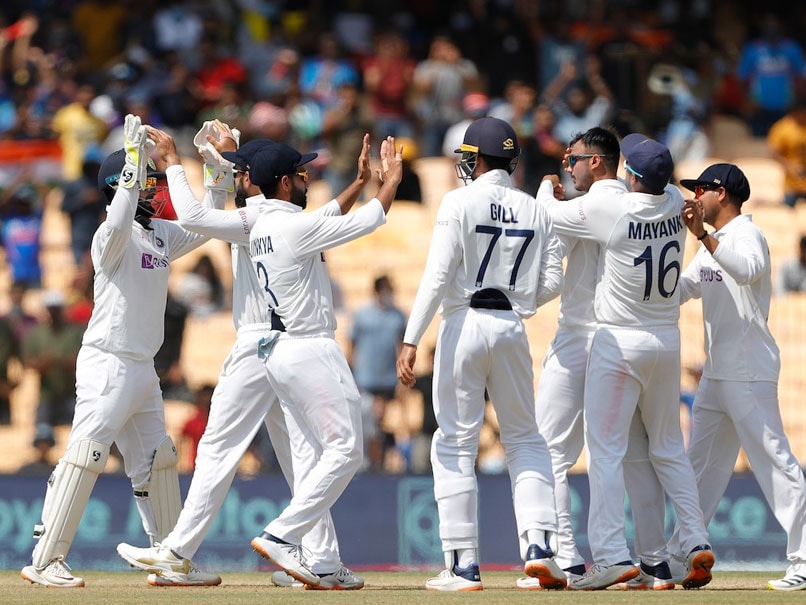 IND vs ENG: India celebrate a wicket during the second Test match against England, in Chennai.© BCCI

India bounced back to winning ways, defeating England by 317 runs on Day 4 of the second Test match, at the MA Chidambaram Stadium in Chennai. Having levelled the four-match series 1-1, the hosts received plenty of praise on social media but former England captain Kevin Pietersen had something else to say. The 40-year-old downplayed the victory, taking a cheeky dig on Virat Kohli's side on Twitter. Congratulating India, Pietersen wrote, "Badhai ho india, England B Ko harane ke liye".

Pietersen's remark wasn't well-received by his fans on Twitter, with many trolling him for his opinion that the win was against "England B".

One fan replied, "I can see the pain behind your smile. Dont worry come up with ur full strength team next time, India will do 2-1."

I can see the pain behind your smile. Dont worry come up with ur full strength team next time, we will do 2-1.

England played this team by their own choice and not because of any injuries. #INDvENG

KP this is for you pic.twitter.com/4mahRNr3mH

Cause A team scared to play....
Well you also know our B team at Gabba really well

Chasing a target of 482, England were bowled out for 164 on Day 4 in the second innings. The visiting side's batting order crumbled against Axar Patel and Ravichandran Ashwin. Axar registered a maiden five-wicket haul in his debut Test match. He took the wickets of Dominic Sibley, Jack Leach, Joe Root, Ollie Pope and Olly Stone.

The two sides face each other in the third Test match, which begins from February 24. The hosts will be aiming to build on their momentum and take a lead in the ongoing series.

Ravichandran Ashwin India vs England 2020-21 India vs England, 2nd Test Cricket
Get the latest updates on India vs South Africa and check out  Schedule, Results and Live Score. Like us on Facebook or follow us on Twitter for more sports updates. You can also download the NDTV Cricket app for Android or iOS.